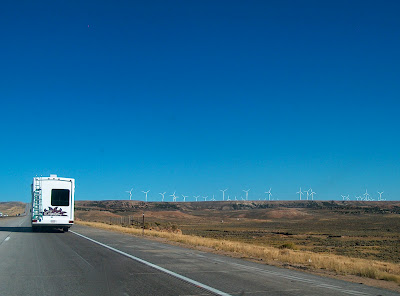 We camped at the Lyman KOA on September 26, after another 300 mile day of travel. As we approached the small town we saw these windmills on the horizon. There are hundreds of them on the high plains of southern Wyoming. They always look so friendly to me, a strange reaction, I'm sure! 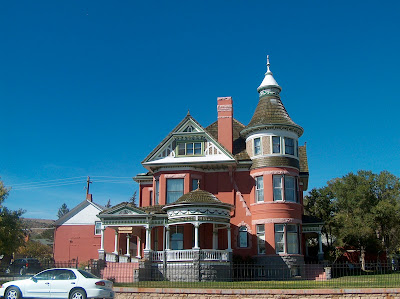 Rawlins, where we stayed at another KOA the night of the 27th, is a quaint, old town. This bed and breakfast was the most striking building besides the prison 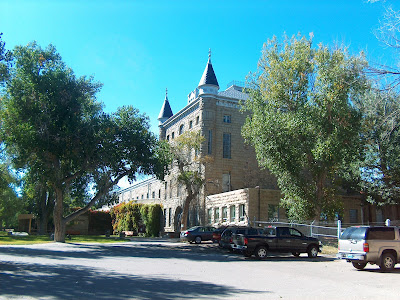 The Old Wyoming State Penitentiary is the landmark of the town. The "Old Pen", as they call it, was constructed in 1901 and served till 1981, and sent a message that Wyoming would no longer be a haven for the lawless. The last known train robber was imprisoned here, as well as many other notorious western outlaws. A new penitentiary has been built outside of town. 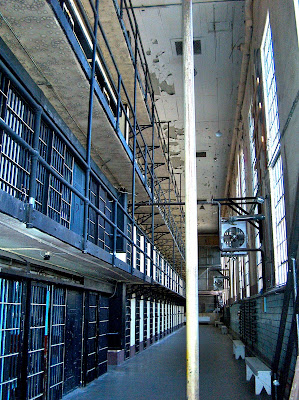 We took the hour-long tour. I must say it was fascinating and at the same time very gruesome and depressing to see how the prisoners were housed. These cells are dark and tiny. 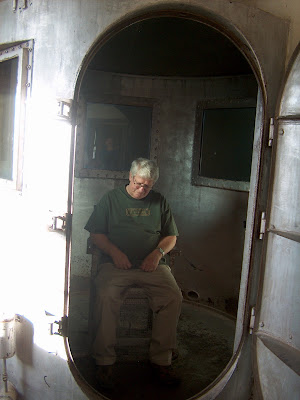 You wouldn't catch me in there, but Keith wanted to sit in the gas chamber, always the actor! 14 prisoners were executed at the "Old Pen" in its 80 year history,  several by a tortuous and sometimes ineffective hanging system, and later by lethal gas. Keith was reprieved by the governor in the nick of time! So...on to happier times and the next leg of our journey. 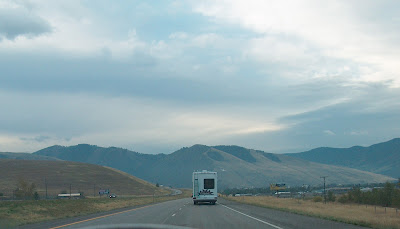 It was with some sadness that we left Missoula on September 24, but also great excitement for the next adventure. You can barely see the "M" on the hill above the city, the white speck just to the right of the 5th wheel. We've loved our time in Missoula. 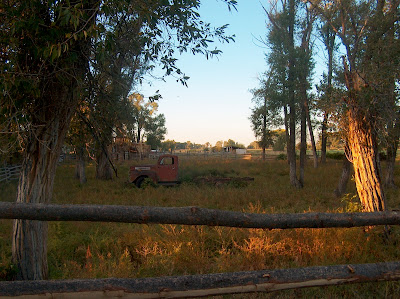 We drove 300 miles to our first stop in Rexburg Idaho to visit Keith's uncle and aunt. I couldn't resist this picture behind our RV park, an old truck in a wooded area. 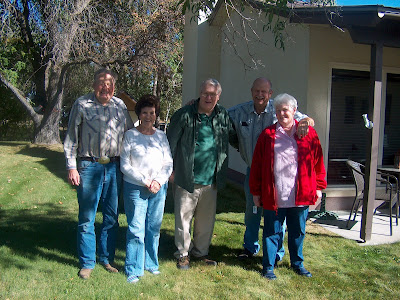 We were treated to a whole day of reminiscing for Keith. He spent his high school years in Rexburg, 1955-1957, living with an older uncle where he did ranch work besides his schooling. In this photo we see Keith in the center, his youngest uncle and his aunt on the right, and a cousin and her husband on the left. Keith had not seen these relatives for about 50 years. 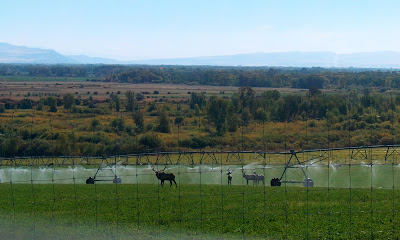 We took a drive up into some buttes west of Rexburg and were surprised to find an elk farm. These elk were standing in the sprinklers, seeming to enjoy themselves keeping cool! In the background you can barely see the Tetons from the west side. This part of Idaho is much like eastern Washington with miles and miles of scab land and sagebrush. Here, though, there is no volcano in evidence that might have caused all the lava everywhere. 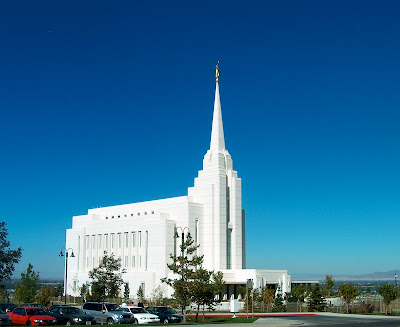 Rexburg is a thoroughly Mormon town with its own temple and a 4 year university named BYU Rexburg. The regular population is about 15,000, and swells to 30,000 when the students are in residence. The town holds blocks and blocks of dormitories for the students. 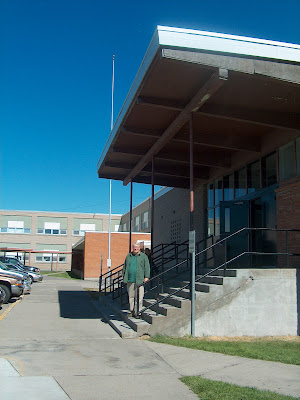 And last but not least, here is Keith in front of his old high school where he was student body president in his senior year. The school is now a middle school but is slated to be torn down after this school year. New buildings have been constructed west of town. It was good timing for him to be able to see it one last time.
Posted by Ann at 9:16 PM No comments: 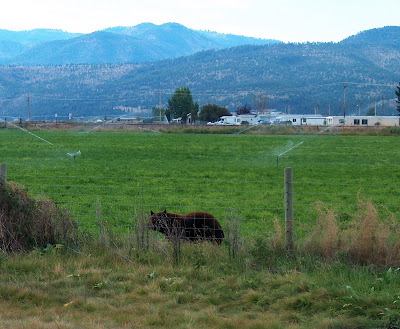 We spend a lot of time on our drives looking for deer and other critters. We've never seen a black bear out in the wild, however. Imagine our surprise, as we were driving back to Missoula the other day, to see a bear running across a cultivated field right by the freeway, I-90! He (or she) was trying to find a way through the barbed wire fence, which would have put him right up on the freeway. 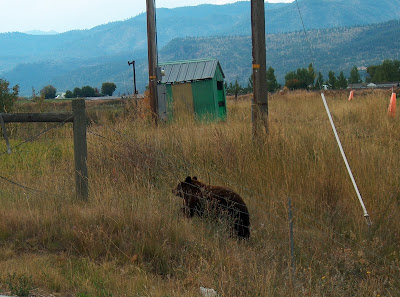 Here he is, going up the bank of an irrigation canal which runs under the road. He jumped in, and we expected to see him come out on the other side. 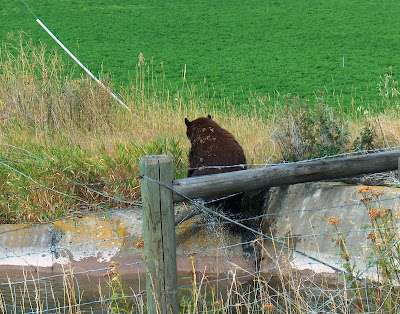 The way must have been blocked, because he surfaced where he'd gone in, and he climbed back out. The last we saw, he'd run back across the field toward the little town you can see in the first photo. Hopefully the residents there will treat him kindly until he finds his way back to the forest.
Posted by Ann at 12:12 PM No comments: 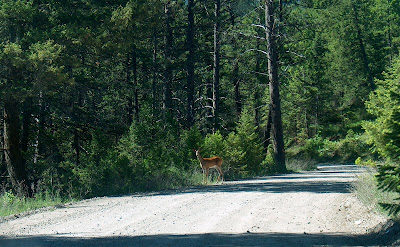 We've enjoyed the abundant deer in the Missoula valley, both out in the wild and in the residential areas. They seem to have no fear! This one was up the Petty Creek Road, the type of narrow, gravel road we seem to be attracted to explore. 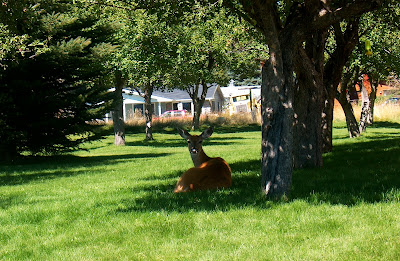 A beautiful canyon right north of the freeway called the Rattlesnake is home to many deer, and also home to a large neighborhood of people. The deer like to camp out in yards and again, have no fear of passing motorists. This photo shows a deer right in a front yard, looking at us with unconcern. We saw several fawns out with their mothers, too. 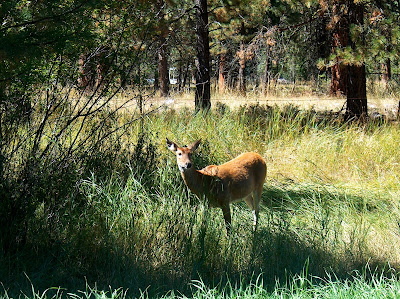 This lady had just exited someone's back yard across the street. She didn't mind our curiosity. Most of the residents enjoy having wildlife in their yards. Many have protected their desired plantings, but seem to give the deer free reign otherwise. 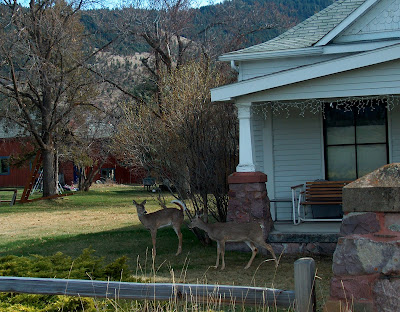