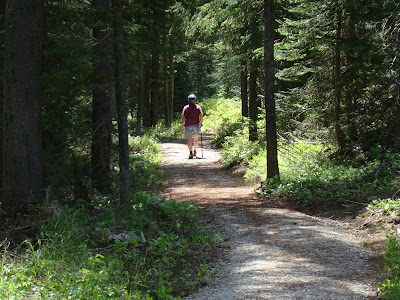 We waited eagerly for news about the camas flowers this spring, a yearly event not to be missed if you are a wildflower aficionado as I am. There is a website that gives updates, and, finally, the time of blooming was announced, and I had a day off at the right time. We drove up to Lolo Pass, on the Montana - Idaho border and found lots of other fans of the camas flower already at the Visitor Center. We had planned to find a trail to hike on in the area, and did that before going out to Packer Meadows where the camas grows. 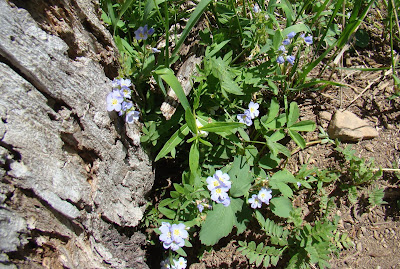 There were so many other kinds of wildflowers blooming all along the trail and everywhere. I was especially happy to find a Jacob's Ladder, one I've seen pictures of, but not ever found for myself. 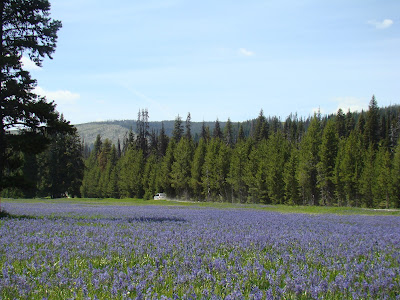 At last, a lake of blue!
The quamash, an Indian word, was a food source for many native peoples in the western United States and Canada. After being harvested in the autumn, once the flowers have withered, the bulbs were pit-roasted or boiled. A pit-cooked camas bulb looks and tastes something like baked sweet potato, but sweeter. When dried, the bulbs could be pounded into flour. Native American tribes who ate camas include the Nez Perce, Cree, Coast Salish, Lummi, and Blackfoot tribes, among many others. 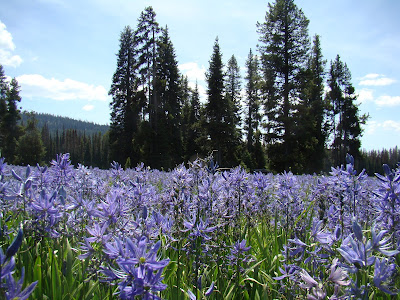 A close-up! I was reluctant to squash any of these gorgeous flowers, but I did carefully get on my knees to snap this photo. 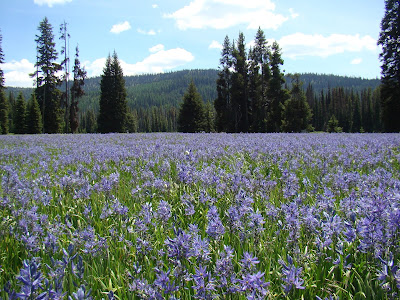 Lewis and Clark, we read, who followed the Lolo Pass trail along with the natives, also camped in Packer Meadows in 1806 and learned from their Native American friends to dig and eat the bulbs. 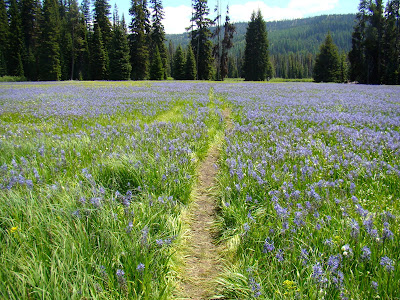 I think everyone else was also reluctant to make paths into the sea of blue, but there was this one well used path out into the middle of the meadow. It was like we all couldn't get enough of the beauty surrounding us! 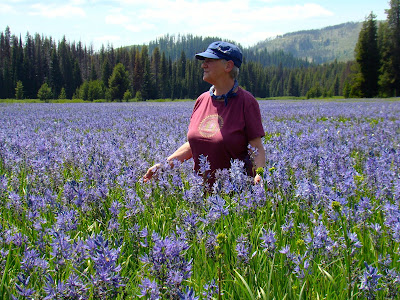 I am drowning in this stunning profusion of flowers, on my knees here. We were so happy that we got to see the blooming at its height. I read that a mere few days later the flowers had begun to fade.
Posted by Ann at 2:39 PM 3 comments: