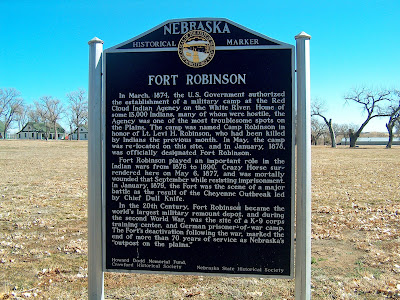 After nearly 2 months of looking at vast Nebraska prairie, we found out about Fort Robinson, just 60 or so miles west of where we have been staying. We spent a whole day there, exploring, and agreed this was the best thing we'd seen since we came to Nebraska.

Fort Robinson is the state's largest and most historic state park. It was an active military post from 1874 to 1948. Some of the colorful characters associated with the place are Crazy Horse, Walter Reed, Red Cloud, Dull Knife, General Crook. Through the years, Fort Robinson was the site of the tragic Cheyenne Outbreak, the nation's largest quartermaster remount depot, a field artillery testing station, an Olympic equestrian training center, the last great gathering place of the Sioux Nation, a training center for dogs used by the military and a World War II prisoner of war camp. (Click on the picture to enlarge. It's interesting reading.) 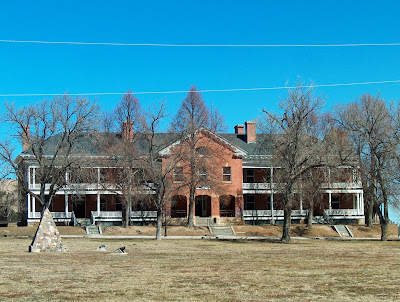 Here is one of the Fort complex buildings, Comanche Hall, built in 1909 to house bachelor officers. There are many large brick, adobe, or wood buildings all around the complex which served the different functions of a fort this size. All are well-maintained and most are used during the summer for tourist lodging. We couldn't help thinking that this would be a terrific place for workampers!

Keith is standing by the monument erected on the spot where Crazy Horse was mortally wounded in 1877. The building behind him is a reconstructed guardhouse where prisoners, including Crazy Horse, were kept. We're used to seeing the huge monument to Crazy Horse in the Black Hills near Custer. I didn't realize that the Black Hills' rich Native American history extended so far into Nebraska. 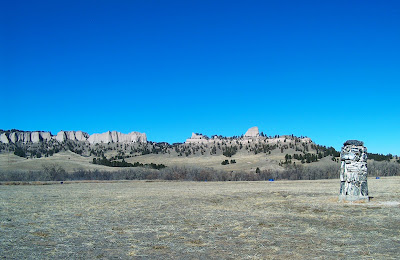 Here is a monument to the Red Cloud Indian Agency, established in 1873 to serve nearly 13,000 Native Americans. The agency buildings were quite extensive, with a beautiful backdrop of sandstone buttes. The whole area speaks of a tragic history for the natives who were forced out of their lands. 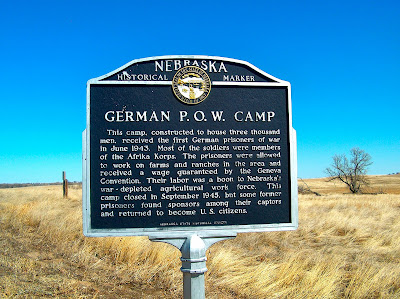 We were surprised to discover that there was a German P.O.W. camp here from 1943-1945. Apparently the Germans were put to work in agriculture, and some of them liked it so well that after the war they returned with their families! 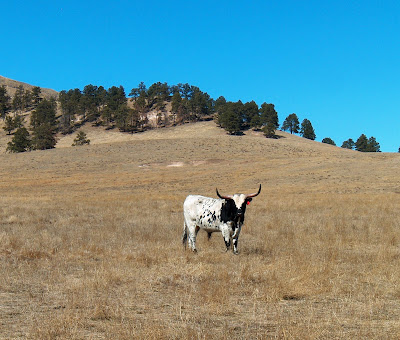 A real Texas longhorn! We saw several in the area. They, and some horses as well as a sizeable buffalo herd, wander freely in the Fort Robinson park area. 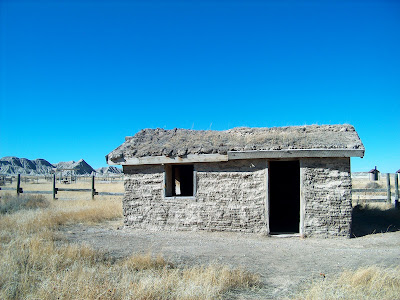 This is a sod house, near a park called "Toadstool" for the unusual sandstone formations. This area looked a little like the Badlands, which are much farther north in South Dakota. Keith and I agreed that we could have spent much more time in the area, and we wish we could return. That's not to be, though, since we are packing up to head out of Nebraska, back into South Dakota, and then on to Montana for our summer job.
Posted by Ann at 10:39 AM

I was born in the Ft. Robinson hospital in 1940. We returned in 1945-6 and the hospital was closed and shortly thereafter was dismantled. In my family we have many stainless steel pitchers that we bought at the "yard sale" when they tore down the hospital (just across the street from where we lived. One of the pitchers is in Venezuela where I have lived since 1974. The picture of the reconstructed guardhouse of the type where Crazy Horse might have been kept is nice but in our day they old headquarters building where supposedly he died was still standing. I was 8 when we left so maybe what I remember was embelished over the years. I was told that some soldiers had come across Crazy Horse's brother while drinking from a nearby stream and shot him. They asked Crazy Horse to come and claim the body and then shot him in the back as he walked in the headquarters to identify his brother.

Thank you! I found your comments to be fascinating. We loved visiting Fort Robinson for the history of the place, and loved the area, too. You have shed some light on the historical events by the fact that you lived there. Thanks again!