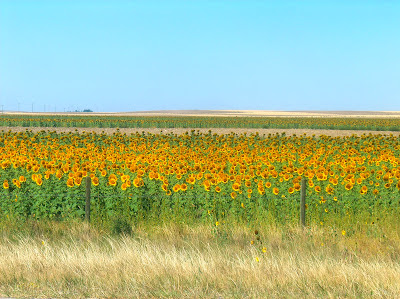 A drive out in the country — no specific destination — just what we needed! We headed east, choosing our usual back roads. I didn't know there were any fields of sunflowers around here so was surprised and thrilled to find these. What could be more beautiful? The flowers' faces were pointed right at us! 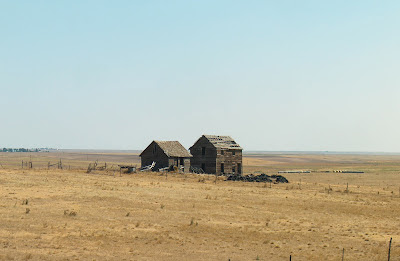 I love finding old, abandoned homesteads out on the prairie. It always makes me wonder why the residents left, and what their lives were like when they lived out here. It must have been a lonely place for them. This scene was near a tiny town named Hillsdale, around which were no hills, only almost flat prairie! Wishful thinking, maybe? And what did they do to make a living? Farming? Crops? Ranching? Cattle or sheep? Questions, questions! 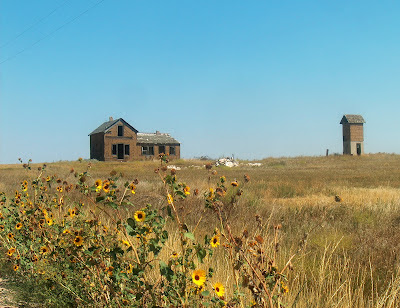 I love the way the wild sunflowers grow all along the roads for miles, here framing this house with its strange looking tower near Albin, Wyoming. We wondered why the skinny little house was built up so high. My first thought was a high-rise outhouse, but Mr. Keith thought it might be a well house. We didn't see anyone we could ask. Right near here, too, we drove a couple of extra miles to cross the Nebraska border, just because we could! 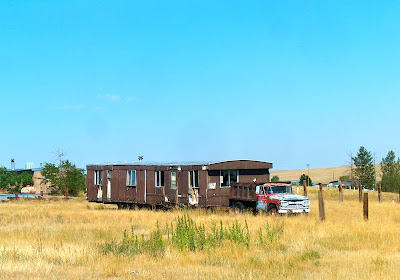 For fun — we wondered if the old, rusty truck was actually the one that pulled this equally old and rusty mobile home into this field. They looked as though they'd both been there for quite awhile. 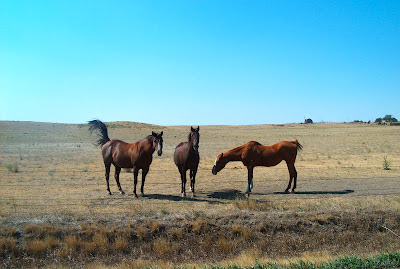 I love to take photos of horses out in their fields. I wondered about the sway-backed, thin horse, but the other two were fat and frisky (see that flying tail?) so horse number 3 must have been an elderly lady. It was a simple drive, but there is always something worth seeing and photographing. We have an awesome country, with great variety of scenery and other fascinating sights. Gotta keep the old camera handy!

I Petted a Buffalo! 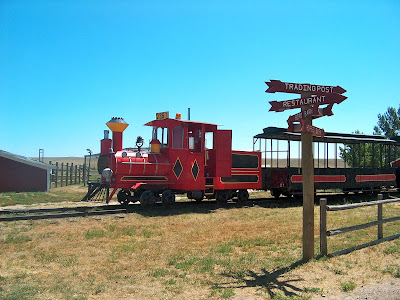 There is a big bison ranch just off I-25 near the Wyoming/Colorado border called The Terry Bison Ranch. The whole ranch looks ancient, and some of the buildings are actually from the 1880s. The Ranch boasts an RV park, a restaurant, gift store, and other touristy attractions. We were told the ranch had the second largest herd of bison for meat in the U.S.  The largest herd is owned by Ted Turner, a name everyone knows. (By the way, the terms bison and buffalo are synonymous for these North American animals.) We'd stopped here before, just to look it over, but this time we decided to take the train ride out into the fields "where the buffalo roam". This is the cute little train we boarded. 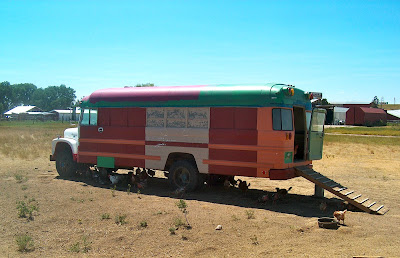 We had an excellent driver and tour guide. I was tickled to see this unique "chicken house", an old bus. The photo doesn't show too well the myriads of chickens resting in the shade underneath. This type of chicken house can be moved from place to place, always giving the chickens a secure home and at the same time fresh ground. I think it's a great idea! 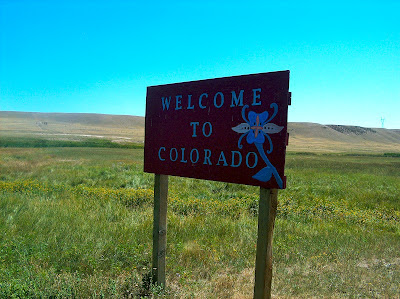 As our train made a loop around the field we were suddenly surprised to see this sign. 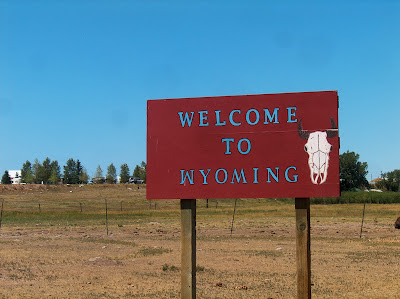 A moment later, around the loop, we were back in Wyoming! 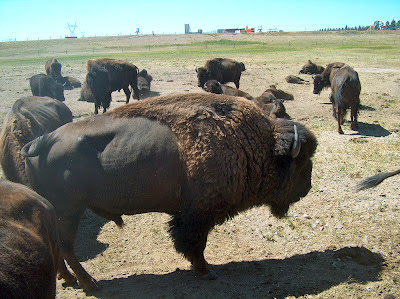 Finally, we came upon the bison we'd been seeking. This is the biggest guy, the head honcho of the herd. 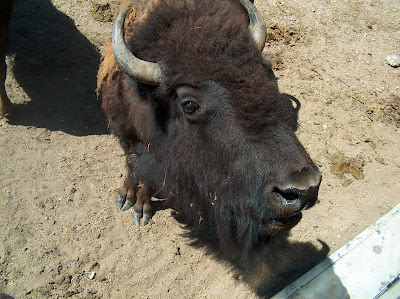 And this lady was the sweetest and the most adept at begging. We'd all purchased bags of special green (alfalfa?) pellets, just for feeding the bison. All these critters knew to approach the train, and fully expected their treats. Out would come their big, gray tongues and the pellet would disappear, leaving behind a very slimed hand. We all fed them till our bags were empty. What fun! 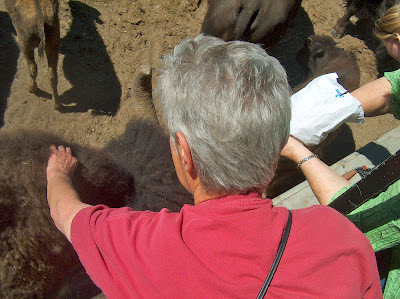 Just to prove my title, here I am petting a buffalo! The fur on this one's neck was curly, and very soft and deep and cushy. Guess that's how they can withstand the harsh, snowy winters on the prairie. 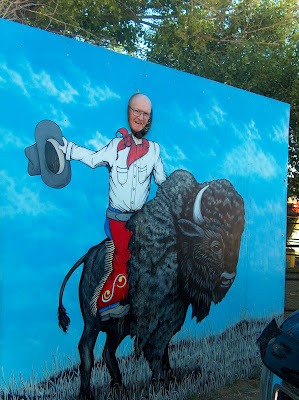 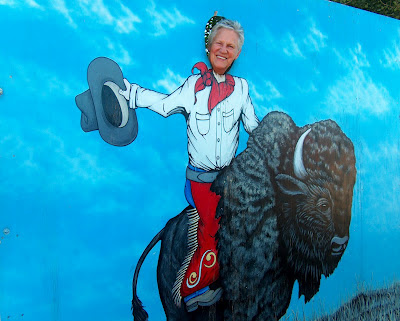 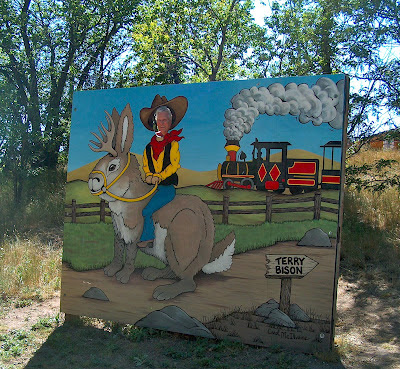 And last, a jackalope! We had a great time here, seeing the bison, some camels, llamas, horses, cows, chickens, a mascot turkey, goats, alpacas, and maybe some other critters I'm forgetting to name. We plan to go back with our friends and fellow workampers next week to eat at the Senator's Restaurant, which boasts the best bison burgers in Wyoming. Gee whiz, I feel a little guilty wanting to eat a bison burger after petting a bison!
Posted by Ann at 5:21 PM 1 comment: 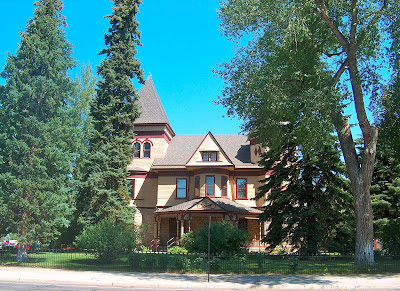 I just recently, sadly, missed my 50 year high school reunion in Mossyrock, Washington. We were just too far away, working at our job at the KOA, and getting Mr. Keith's chemo treatments. Imagine my joy when my friend Mari, former neighbor and classmate from our school days emailed me to say she and hubby were coming to Laramie to visit their son and family, and could we come there and meet them for lunch and visiting! I was overjoyed! We arrived early in Laramie last Sunday morning, so had time to tour around the town. It's a lovely city — the University of Wyoming is there. We also found the Ivinson Mansion, built in 1892. It is now the Laramie Plains Museum. 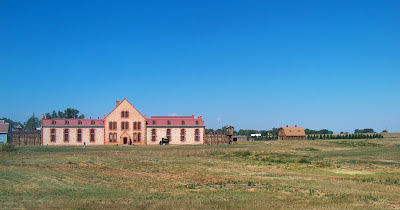 We'd heard about the Wyoming Territorial Prison so we located that. The prison was built in the 1870s and was the only prison to actually incarcerate Butch Cassidy. We will definitely plan another trip to Laramie so that we can go inside both of these historical buildings, and maybe we'll find even more to investigate! 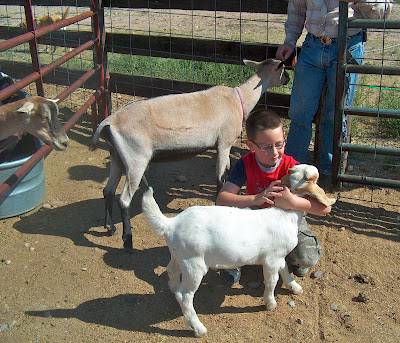 We met the family outside the Catholic Church, then went to lunch with Mari and George at a local restaurant, where Mr. Keith had his usual shrimp, and I had my favorite, a buffalo burger. Most of all, we enjoyed catching up with our friends! We had last seen them in 2007 when we were workamping at an RV resort near Olympia, Washington. After lunch we were invited to go out to the "ranch", where we met the grandchildren (there are 7 in all), as well as lots of rabbits, goats, chickens, horses, and even a friendly dog and a shy cat. Here is a photo of the youngest grandson, Jeremiah, who proudly acted as our tour guide. These goats are for milk, which the family consumes, and I believe also markets. John, Mari's son, is an extension agent with the University. 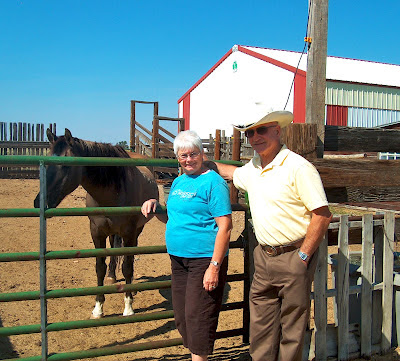 I did snap one photo of our friends, Mari and George. I wish I had gotten more! What a wonderful day we had with them! They are truly a  special couple, full of love and kindness and memories! We will try to see them again when we make our fall trip back to Washington. Our visit was truly the best day we've had all summer! Thanks, Mari and George! 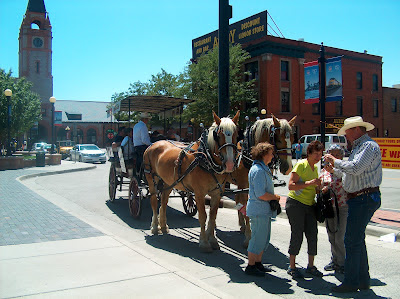 Something we've been meaning to do since summer began was to ride the Trolley in Cheyenne, a touristy attraction complete with tour guide. At first we thought maybe we'd take the horse drawn wagon, but since the ride was only 20 minutes long we decided on the Trolley, a 2 hour jaunt through town. We purchased our tickets here at the Depot, which is Cheyenne's visitor center. 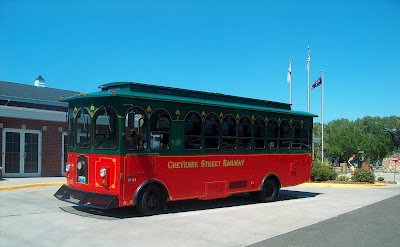 We had an excellent tour guide, a native to Cheyenne, who is also a school bus driver come September. He was full of stories about the origin of Cheyenne, the railroad, most historical buildings in the city, and even some tales about famous people who'd been in the town. I didn't get any pictures as we were riding, only at our one stop, the Old West Museum at Frontier Park, the site of the famous Frontier Days. I remember one story he told, as we drove through another park, Holliday. He pointed out some big, old cottonwoods and said that Steve McQueen and Ali McGraw had gotten married there, just because Steve liked the city of Cheyenne. He'd starred in a movie about an area outlaw, the infamous Tom Horn. 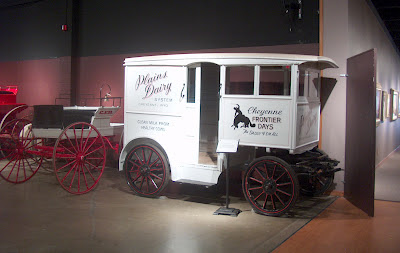 The museum was full of old wagons of various uses. I liked this milk wagon, restored, and featured in the parades that take place during Frontier Days. There was also an extensive display of the rodeo history of Cheyenne. We plan to return and take our time going through this museum. There is so much to see and learn! 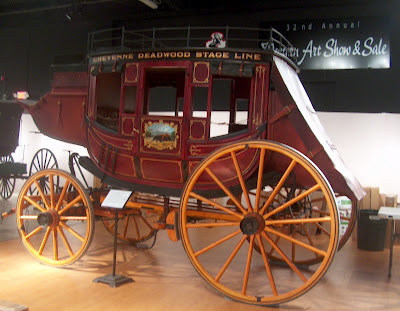 But we were most impressed with this wagon, one of the original stages used for the journey between Cheyenne and Deadwood. It has been beautifully restored. It's difficult to imagine going the 300 miles between the towns sitting on the narrow though luxurious seats we saw inside. We were told it took about 55 hours for the trip, which was fraught with the perils of robbers and Indians. We've made that same trip in about 7 or 8 hours with our 5th wheel. On one memorable trip the stage was robbed 3 times and the passengers arrived at their destination wearing only their underwear!  Since we've had workamper jobs in both Deadwood and Cheyenne, it was interesting to us to hear about the towns' connections way back in the late 1800s and early 1900s. 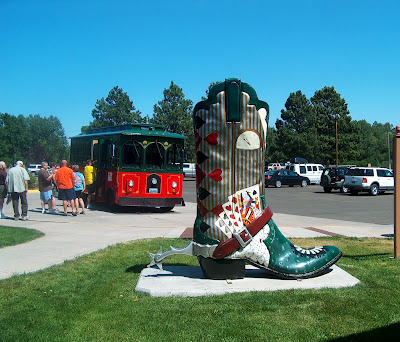 At the museum we saw one of Cheyenne's famous boots. There are many of these boots scattered around town, each one with different art work and featuring a different part of the city's history. This one was decorated with gambling paraphernalia. Here we are boarding the trolley for the second half of the trip. Mr. Keith is in the tan shirt in the left of the photo. He had found a man from San Francisco to swap stories with about the old days of living there. 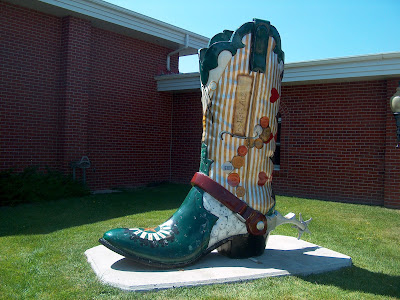 One last photo, the other side of the boot at the museum. These are works of art. You can take an auto tour of all the boots with a pamphlet that tells about each one. We may do that on another day out!