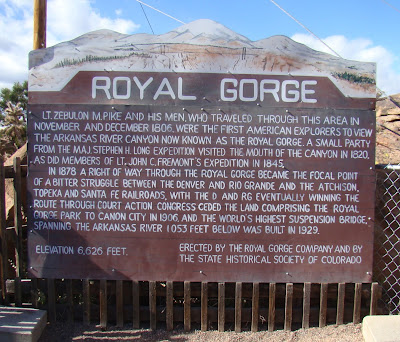 With temperatures dropping almost to freezing in La Junta lately, we knew we needed to get up into the Rockies to see the Royal Gorge Bridge before the snow came. We chose a bright and sunny day, but it was still very cold and quite windy up there. We were a little shocked to learn we had to pay $14.00 each, even with our discount, but there were lots of activities and displays to go along with the the main attraction, the bridge and the deep, deep canyon it spans as the highest suspension bridge in the world. 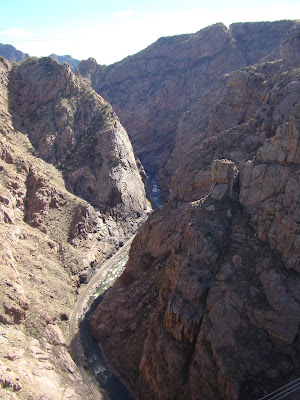 I was quite disappointed that I couldn't get many good photos. The sun was so bright and right in our eyes, and the canyon was so far down and very narrow. That is the Arkansas River below, as well as a railroad track. It is difficult to imagine how they built it. You can get an idea how far down the river is if you try to picture a train down there on the track. 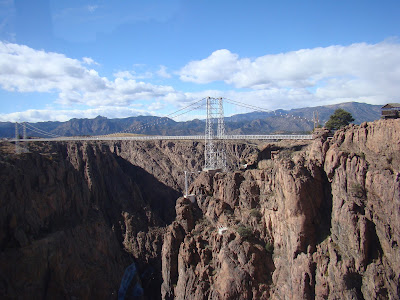 The Park furnishes vehicles one can ride in to cross the bridge as well as Gondolas swinging out over the abyss. We chose to walk across, but by the time we reached the other side we were so cold we decided to chance the scary, swaying Gondolas on the way back. 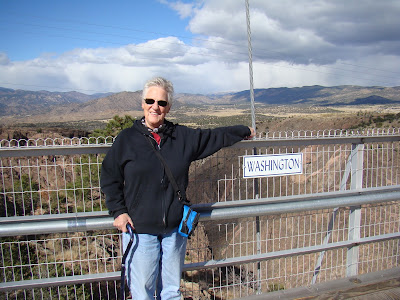 Every state was represented along the Bridge. Washington was at the far end, of course! Right about here I was really wishing I'd worn something warmer! The winds howled up furiously through the gorge. 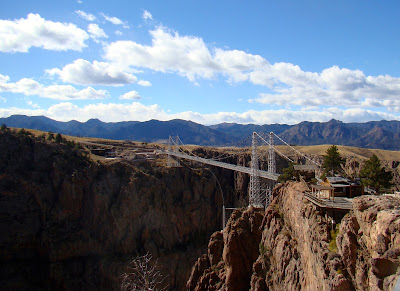 Another vantage point with the Rockies in the background. 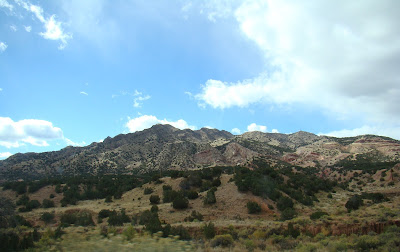 I love the colors along the Front Range of the Rockies. This was snapped just outside Canon (pronounced Canyon) City. 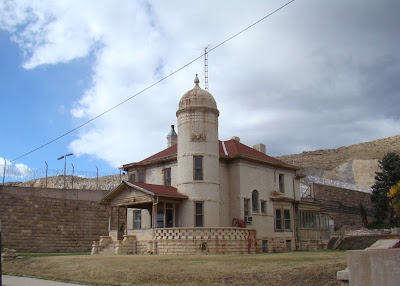 After our tour of the Royal Gorge Bridge and Park we ventured down into Canon City for lunch and for some sight-seeing. We noticed on the way to the city that there were at least 3 huge prisons built into the side hills, and then there was another large and older one just at the edge of the city! I liked this old building outside the walls of the prison. It looked unused. The prison walls to the left and behind were heavily lined with barbed wire. No escaping from this place! 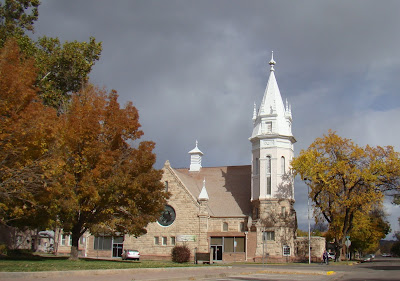 After lunch on historic Main Street we toured the town. I was especially intrigued with the many churches we found.  A good antidote for all the prisons maybe? This magnificent edifice is the Presbyterian Church. And we were pleasantly surprised to see that we hadn't missed too much of the beautiful Colorado autumn colors! 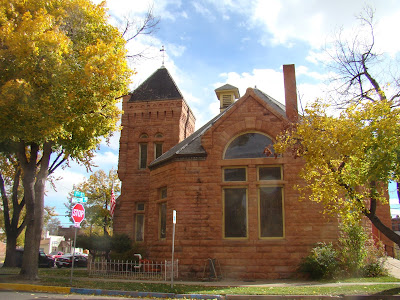 And here is the Baptist. 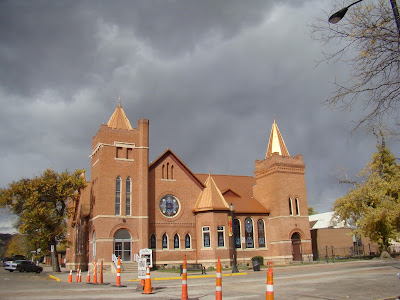 The United Methodist was especially exquisite. Main Street was being torn up for reconstruction so this was the best I could do for this church. Mr. Keith and I agreed that it would be worth the 110 mile drive from La Junta to Canon City once again to do some more in depth exploring here. Colorado has so many great old towns up in the Rockies!
Posted by Ann at 3:54 PM No comments: