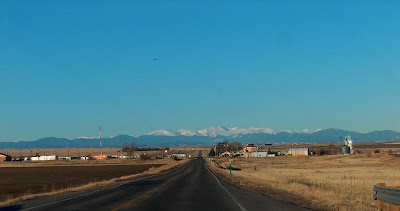 We see this scene every time we get in the car for our excursions west. The Rockies are magnificent! This photo was taken on Hwy 36 near Watkins. 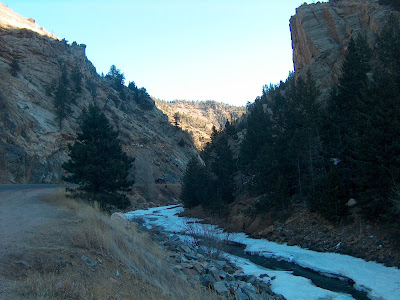 In my post from last week I showed a photo looking down into a gorge with a road running through it. We determined we just had to go on that road! It's Hwy 6, going to Central City, our destination for the day. There isn't much snow in the area, but you can see how cold it is by frozen Clear Creek. 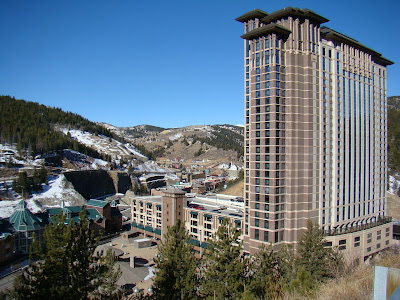 We'd heard that the old mining towns of Black Hawk and Central City, even though on the National Register of Historic Places, had been turned into gambling towns, much like Deadwood SD. These huge casinos completely dwarfed the original town, which has also been restored and made into gambling places. This is Black Hawk.
(Click to enlarge.) 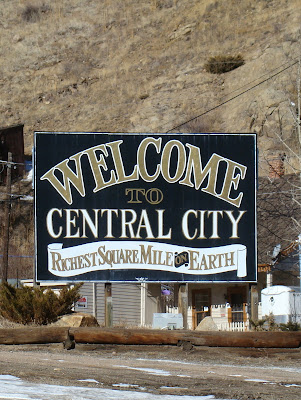 This sign greeted us as we drove into Central City. Central City is located 35 miles west of Denver at an elevation of 8, 496 feet. Mr. Keith, always the jokester, rolled down his window and asked a flagger, "If it says 8,000 feet, does that mean there are 4,000 people in this town?" He even asked a policeman that question, and got some good laughs. 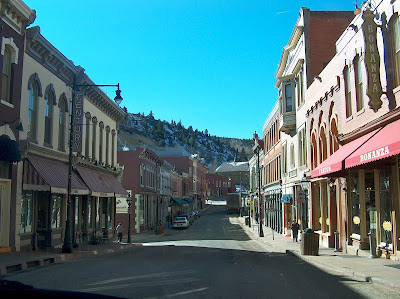 In 1859, John Gregory discovered "The Gregory Lode" in a gulch near Central City. Within two weeks, the gold rush was on and within two months the population grew to 10,000 people seeking their fortunes. William Byers, founder of the Rocky Mountain News, and some companions pitched their tents on open ground squarely in the center of the mining district. Thus Central City was born and was soon the leading mining center in Colorado. It came to be known as "The Richest Square Mile On Earth". Gregory's discovery is commemorated by a stone monument at the eastern end of the city. I don't know the time period, but Butte MT has also laid claim to being the richest spot on earth! In this photo you can see the old downtown, Main Street, restored. 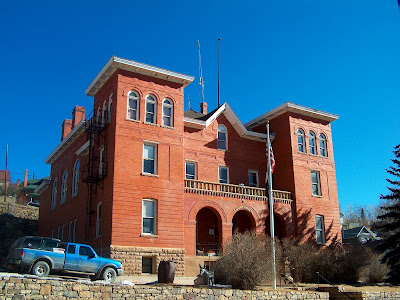 We liked the Courthouse. All the buildings except the main street are perched on the side of the gulch. It seems all the old mining towns we've visited are like that — a narrow gulch with the houses marching up the sidehills. The streets are tricky to drive, very narrow, since they were originally made for horses and buggies. 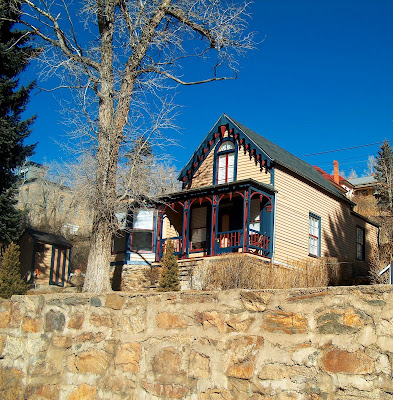 This cute little house caught my eye. All the houses were tiny. Some looked like they were built for very short people. I guess they were shorter way back then! We noticed, for example, that in the ghost town Garnet MT we had to actually stoop down to get through the doorways! 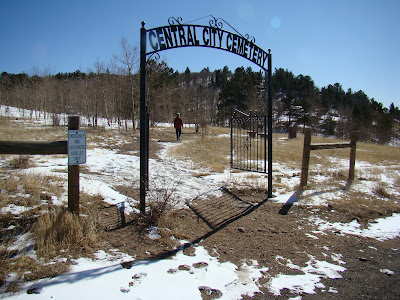 There were about 5 or 6 cemeteries in Central City, just outside of town. This one was labeled Central City Cemetery, and was quite neglected. Groves of young aspen trees had grown up all around the headstones. That's me walking through there. I am fascinated by very old graveyards. I always wonder how the folks lived in those days, and how they died. (Click to enlarge.) 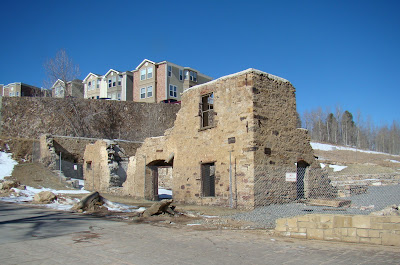 Here we saw quite a contrast between the new apartment buildings (probably to house the casino and hotel employees) and the ruins of a once sizable structure. This one has a chain link fence around it and concrete applied to the tops of the walls to prevent further erosion. There was no sign to say what it used to be. 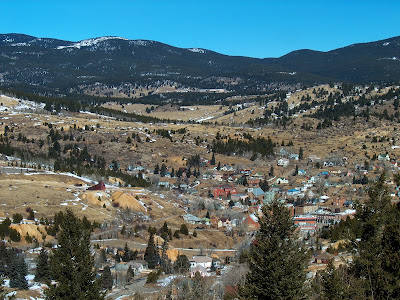 We just had to visit a brand new KOA Kampground above the city, and this is the view from there! It is the whole town of Central City spread out below. We were thinking we would love to be able to stay there in the summer and look at this panorama! It was quite a narrow, winding road to get up there, which would be difficult for a big rig like ours, but worth it. (Again, click to enlarge.) 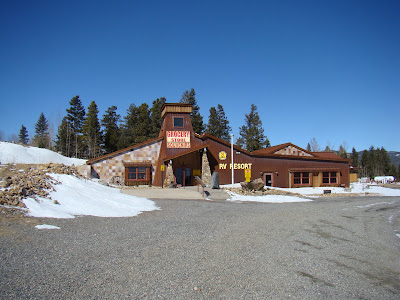 The main office and store for this KOA is made to look like a mining shaft. Not your traditional A-Frame KOA building! Altogether, it was a wonderful day of sightseeing once again! In our efforts to stay off the freeways we've found many beautiful valleys and gulches to go through on the west side of Denver.

we have been RV fulltiming for almost 2 years and have never stayed at a KOA - how weird is that. You got some great pics going on and a fan here loving it....