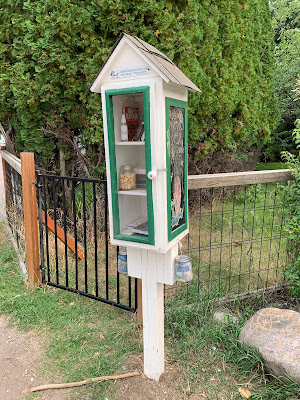 I discovered a new trail last week and today I decided to try it again. It's only 1/2 mile long, right along Rattlesnake Creek and in the middle of a neighborhood though well hidden and private. It's called the Tom Green Trail. I so appreciate the work that has gone into the many trails around Missoula. There are trails for just about any skill level and mine has become much simplified in my old age and with my sore knees! At the beginning of the trail I discovered this tiny library stocked with several books, some dog treats, 2 jars of sidewalk chalk to go with the blackboard on the side of the library, some hand sanitizer, and a notebook and pen for recording anything the visitor might like to write. 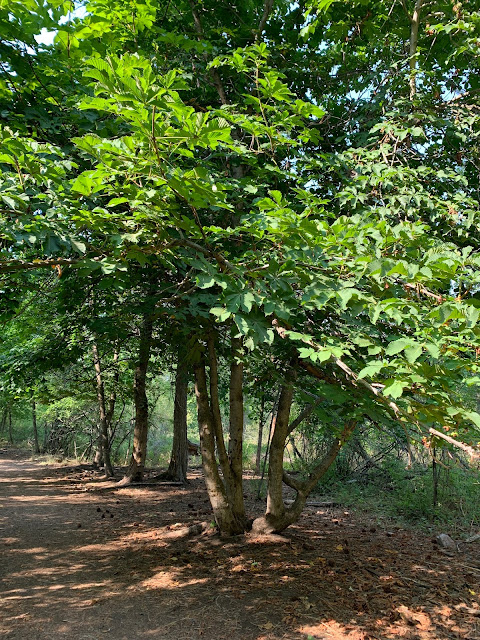 The Tom Green Trail is an easy walk with lots of shade, a wide trail for hikers and bicyclers. 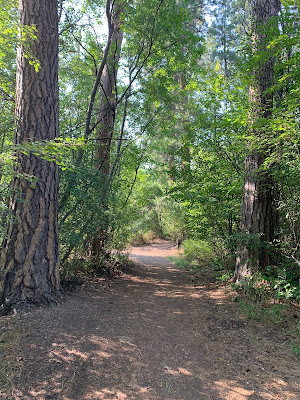 I love the many beautiful trees I see on most of my walks, mostly ponderosas and cottonwoods that have attained a good height. I saw a deer this time, and, in spite of warnings about bears in the area, I did not encounter any. I never remember to carry my bear spray anyway! 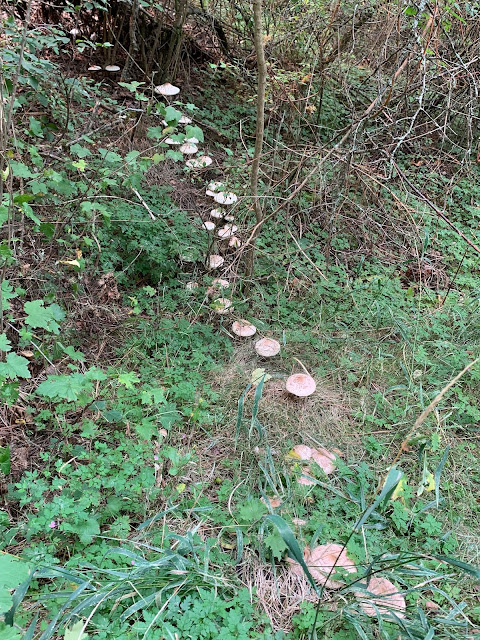 I love surprises in nature and here I saw something I've never seen before! Crossing my path and meandering off several hundred feet into the brush was this line of mushrooms, each one 4-6 inches across. I followed it quite a ways until the brush got in my way and wondered how much farther it went. When I posted my photo on Facebook I got a suggestion that it was a "fairy ring", something I've never encountered, though I've heard of it. This didn't appear to be a ring, unless the ring was really, really large. Is there such a thing as a fairy line?
From Wikipedia:

A fairy ring, also known as fairy circle, elf circle, elf ring or pixie ring, is a naturally occurring ring or arc of mushrooms. They are found mainly in forested areas, but also appear in grasslands or rangelands. Fairy rings are detectable by sporocarps (fungal spore pods) in rings or arcs, as well as by a necrotic zone (dead grass), or a ring of dark green grass. Fungus mycelium is present in the ring or arc underneath. The rings may grow to over 10 metres (33 ft) in diameter, and they become stable over time as the fungus grows and seeks food underground.

Fairy rings are the subject of much folklore and myth worldwide—particularly in Western Europe. They are often seen as hazardous or dangerous places, and linked with witches or the Devil in folklore. Conversely, they can sometimes be linked with good fortune. 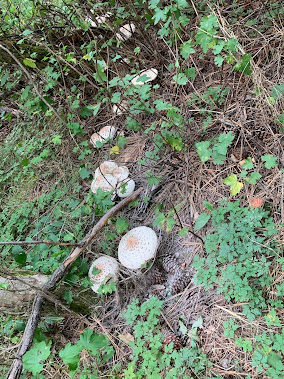 He wha tills the fairies' green

And he wha spills the fairies' ring

Betide him want and wae.

For weirdless days and weary nights

Are his till his deein' day.

But he wha gaes by the fairy ring,

Nae dule nor pine shall see,

And he wha cleans the fairy ring

An easy death shall dee.

Apparently fairy rings can be made up of a variety of different types of mushrooms. I couldn't find a name for these particular ones. 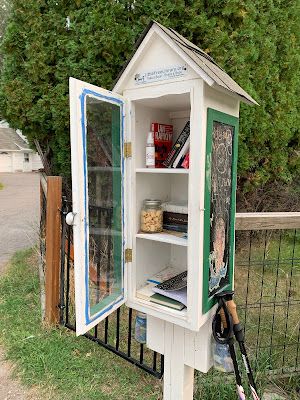 So, after my exciting discovery, here I am on my way back out, stopping at the tiny library again. This time I selected a small book called "Me" by Katharine Hepburn, and I signed the notebook with thanks for the library and my first name and my age, just for fun. Here's to the joy of finding new trails and new learning experiences!
Posted by Ann at 4:59 PM No comments:

The Beginning: Choosing our RV 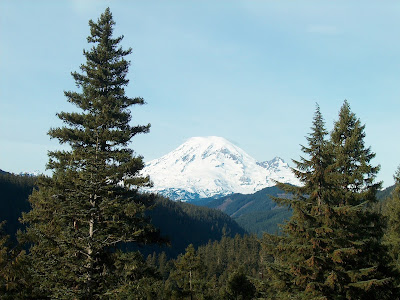 In 2004 our lives took a dramatic turn. Mr. Keith had decided to retire from his years working in homeless shelters, his latest as Director of the Hospitality House in Wenatchee, where we met. By co-incidence, or was it God-cidence, I had been making a hobby out of studying RVs and workamping, something I never thought would happen but that was fun to dream about. Upon his retirement, he said "Let's go for it!" By that time I had narrowed my web searches to 5th wheels and was looking at rigs that came with a truck to haul the 5th wheel. Strangely, the one that looked the best was located in the very town where I had attended 12 years of school, a 5 hour drive away in Mossyrock. We contacted the sellers, they said come on over, and we did. Our route took us across White Pass and the beautiful Mt. Ranier. 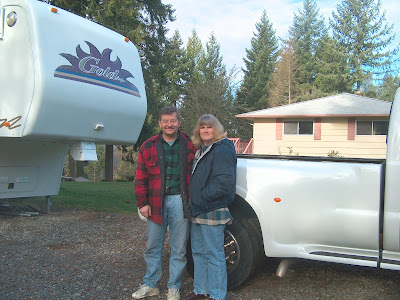 We met Joette and Harley and our potential new home. They had used the rig in Harley's job, which took him back and forth between the bigger Washington cities. They were ready for a change and no longer needed such a big RV. 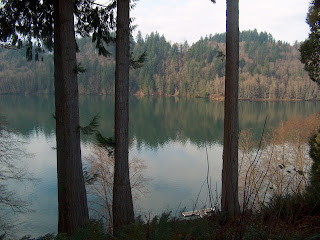 I enjoyed the view right behind their property, Lake Mayfield. I had spent my high school years riding the bus to school and watching the clearing of land and the destruction of small towns along the Cowlitz River and the eventual filling of the lake behind the Mayfield Dam, named for the tiny town of Mayfield a few hundred yards down river, now lake. 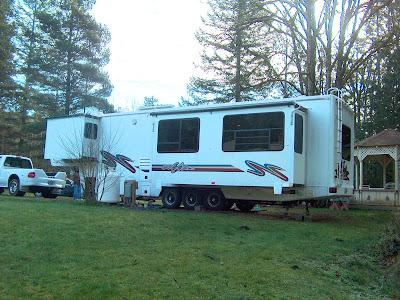 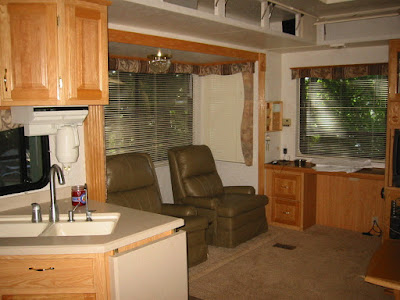 Harley and Joette invited us to spend the night in the rig to get a feel for what it would be like. We loved the inside, the arrangement of kitchen cupboards, desk, everything. It was however a little daunting to think about moving from a 4 bedroom, 3 bath house with 40 years worth of stuff. Downsizing would be a major undertaking. We loved it, however. It was so fun "camping" in our first RV for that one night. We had neither one of us ever ridden or hardly been inside an RV. But we were sold! 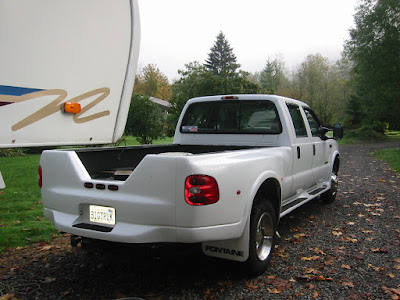 This is BigTruk, so named by Harley and Joette, a 1 1/2 ton F-450 Ford. We loved the personalized license plate. We went for a drive with the rig, Keith driving while Harley guided and explained everything. We were amazed, and have since found out with experience, that they had done everything right in outfitting BigTruk with after-market add ons to make the pulling and traveling the best it could be. In 16 years BigTruk has never let us down!
We returned home to get ready to sell our house, and by January 1, 2005, we were headed over the mountains with check in hand to bring our new home back to Wenatchee, where we had an RV spot, and where we would live for about 5 months until I could wrap up my piano teaching job and find our first workamping job. The adventure had begun!
Posted by Ann at 3:54 PM No comments: 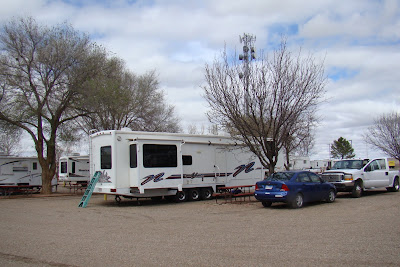 These photos have lain idly waiting for some narration for a long time. Even though this event was in 2016 I can still remember the details. We had a winter job at the La Junta Colorado KOA 2015-2016. It was our last job together before Mr. Keith passed away in 2020 so it holds special memories. In this photo the snow is gone, it's April, and we are getting ready to leave for Montana and my summer job at the Missoula KOA as a single workamper. 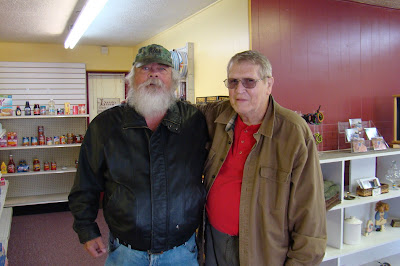 A great photo of these 2 old coots, as they liked to describe themselves. Kenny lived alone in his motorhome at the KOA. He walked daily to try to stave off his COPD and to keep healthy. He had led a rugged life in southern Colorado before becoming disabled. He looks like a mountain man! Kenny had recently turned to faith in God and frequently picked Mr. Keith's brain for spiritual help and advice. They helped each other. His parting gift to us was a beautiful jeweled cross wall hanging. I have it still. 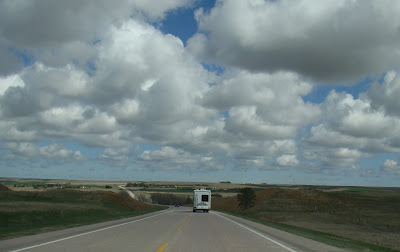 Back on the road again, heading north through Colorado and Nebraska on highway 70 and then to Rapid City where we needed to renew our driver's licenses, as South Dakota is our state of residence. I remember thinking how beautiful the prairies are in spring, though seeming desolate sometimes. I also knew this would probably be our last trip in our home on wheels as I knew Mr. Keith wouldn't be able to work any longer as he fought cancer, let alone maneuver the 5th wheel. So we enjoyed every mile. I am following behind in my little Focus (and taking pictures) as Keith hauls our house down the highway. 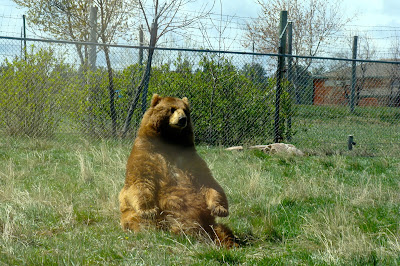 Of course we had to visit Bear Country USA, our very first workamping job in 2005, and where we returned in the summers of 2006 and 2008. Even though it had been 8 years since our last summer there, some of the current employees recognized us! We saw bears, bears, and more bears as well as the myriad of other animals residing there! What memories it brought back as we drove through where the big animals are and then parked to walk through Babyland, for small animals and everyone's favorite, the bear cubs. 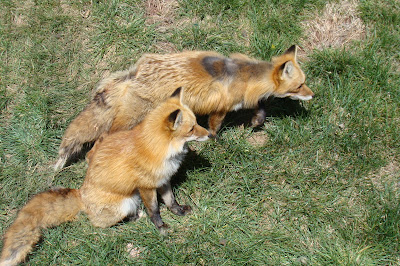 The foxes were always some of my special critters when we worked there, and now we saw the descendants of those we'd enjoyed feeding back then. 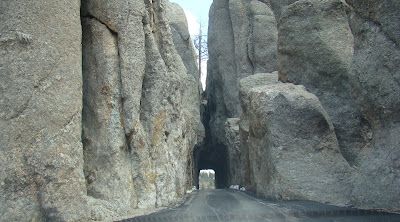 A trip to the Black Hills is not complete without a drive through the winding, narrow roads leading to "The Eye of the Needle". The tunnels and roads here are amazing and beautiful. 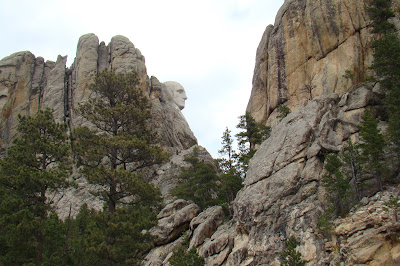 Of course, Mt. Rushmore! We always enjoyed this sneak peak of President Washington. 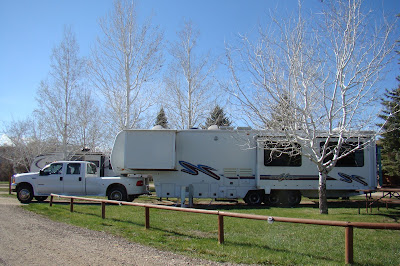 A favorite stop of ours has always been the Buffalo, Wyoming KOA. We always thought we'd have loved to have worked there. It's early enough in the spring for the trees to still be bare. 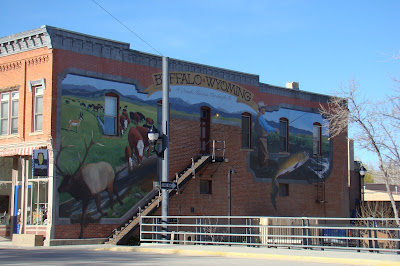 Downtown Buffalo. I couldn't help but think of the TV show we loved "Longmire", which is supposed to take place here. It's filmed elsewhere but the town capitalizes on the fame with headquarters for fans.
Well, these are the only photos I found languishing waiting for me to describe our memories. I hope to go back to some of our thousands of photos and make some more writings about our adventures prior to 2008 when I began my blog. Mr. Keith's passing has left a huge hole in my life, but what incomparable times we had in our RVing and workamping years. I wouldn't have traded it for anything! Thank you, Mr. Keith!