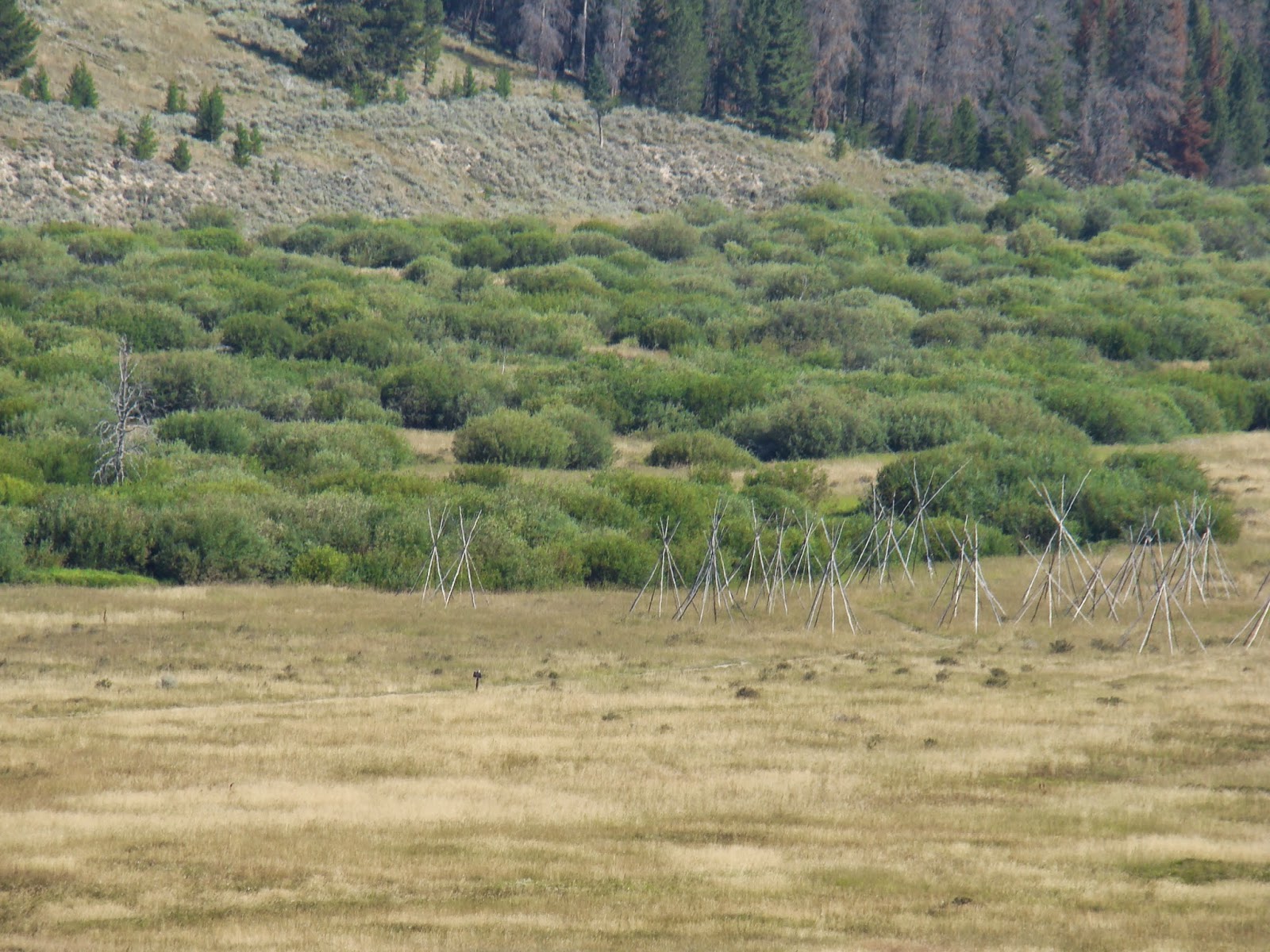 In the summer of 1877 five bands of Nez Perce Indians consisting of 800 people, including 250 warriors, began a 1,170 mile journey from northeastern Oregon and central Idaho over the Bitterroot Mountains and through the Montana Territory. Though they were herding more than 2,000 horses and carrying whatever possessions they could manage, the Nez Perce made this long and difficult trek in less than four months. United States Army troops under General Oliver O. Howard had orders to place these five bands of Nez Perce on a small reservation in central Idaho. The Nez Perce had hoped to elude the soldiers, but they were forced to stop and face their pursuers several times. The battle with the highest number of casualties during this epic odyssey took place in the Big Hole Valley of southwestern Montana. The Battle of the Big Hole was a tragic turning point of what came to be called the Nez Perce War of 1877. The view above is from the visitor center, looking down on the battlefield. Teepee poles can be seen in the same spot where the original encampment was placed. 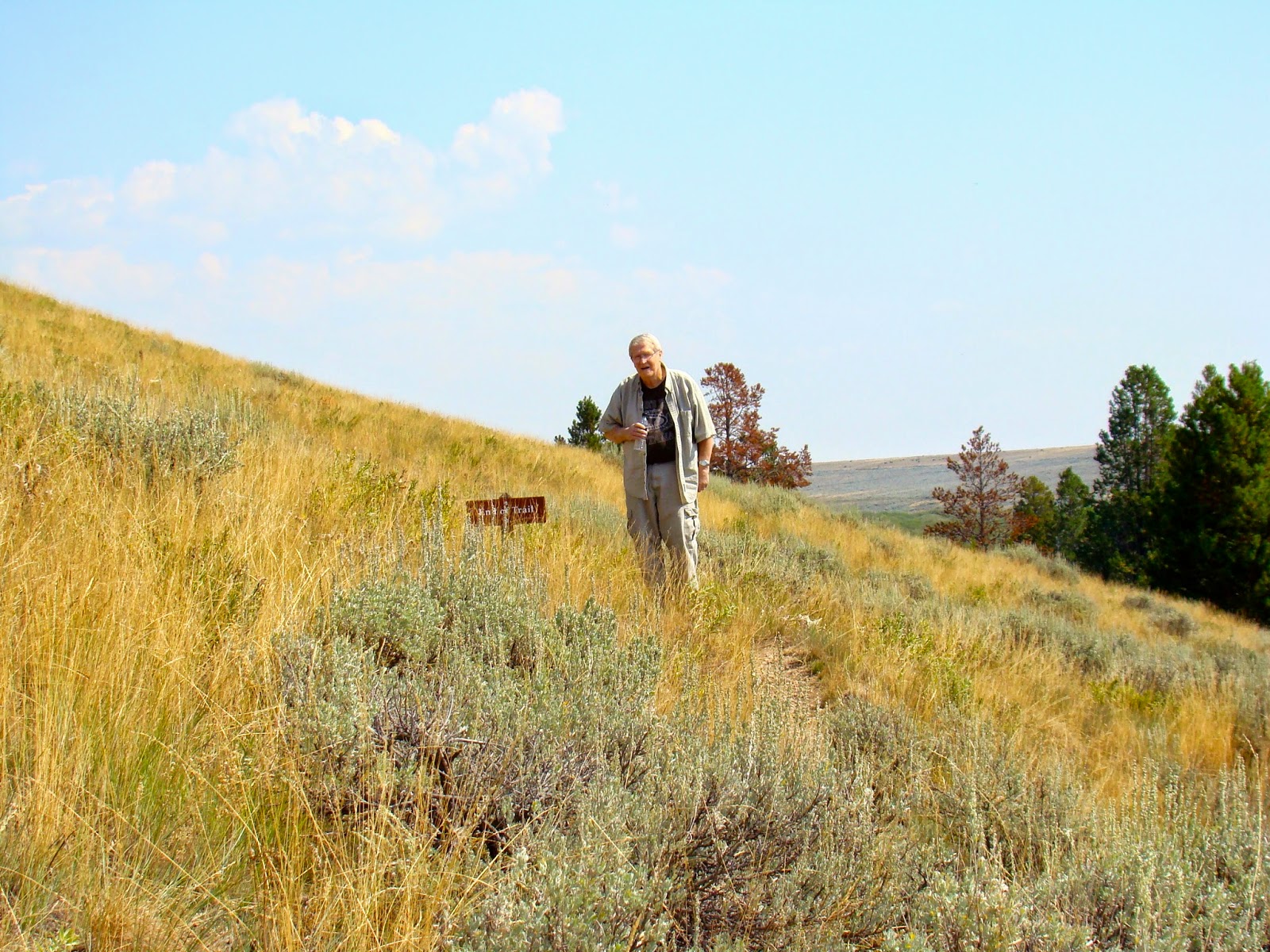 We took the trails leading to several points in the battle. From this viewpoint we could look down on the entire valley. 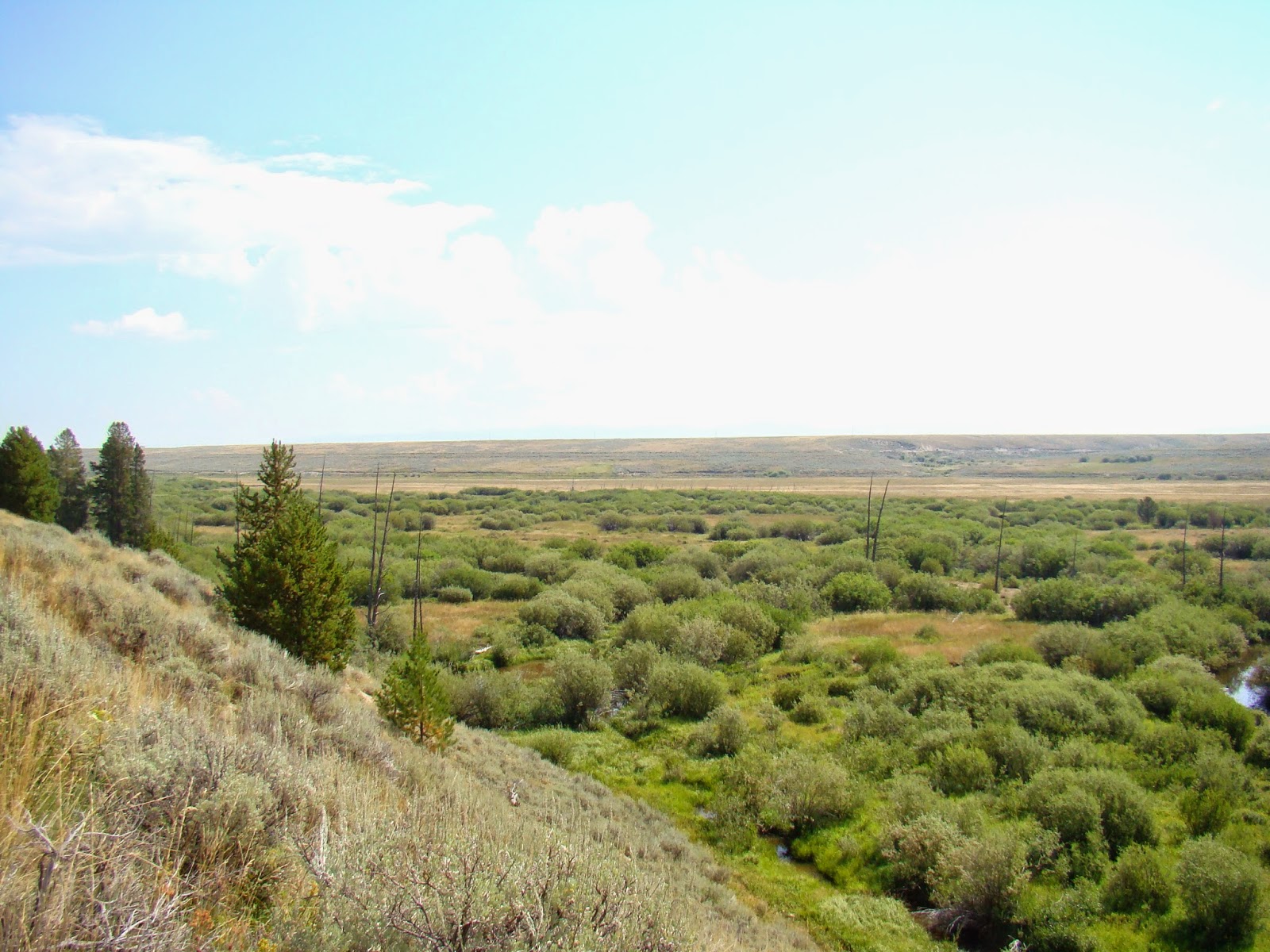 The soldiers attacked from the forested hillside, here showing the bushes and trees growing along a winding creek. 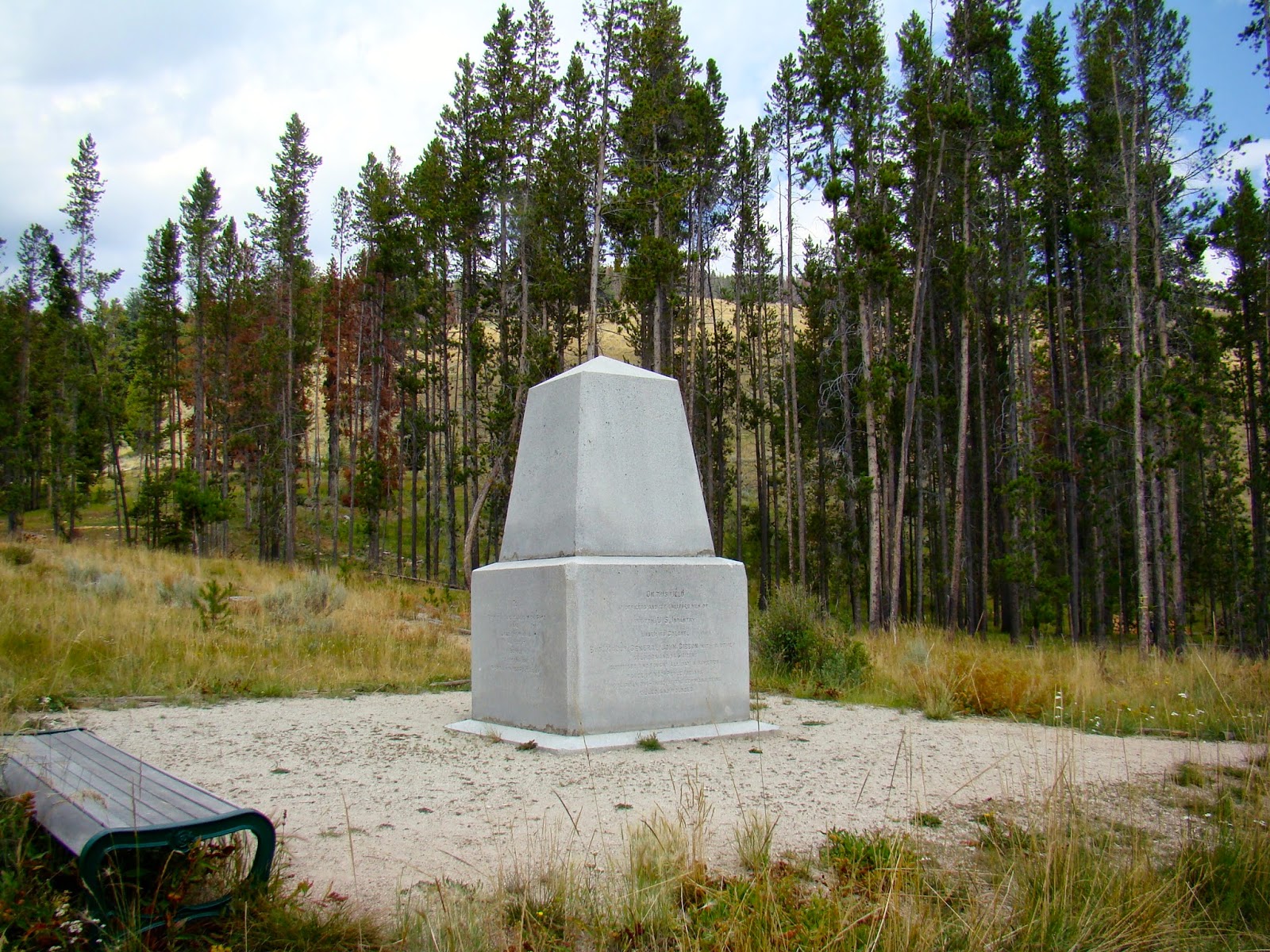 A monument has been erected telling the names and numbers of soldiers lost in the battle. The army, under the control of General Howard, conducted a sneak attack on the sleeping Indians early in the morning. 60 to 90 members of the tribe were killed, mostly women, children and the elderly. The warriors quickly launched a counter attack where 29 soldiers were killed and 40 wounded. In a military sense, the Nez Perce won the battle, but had to continue to flee. 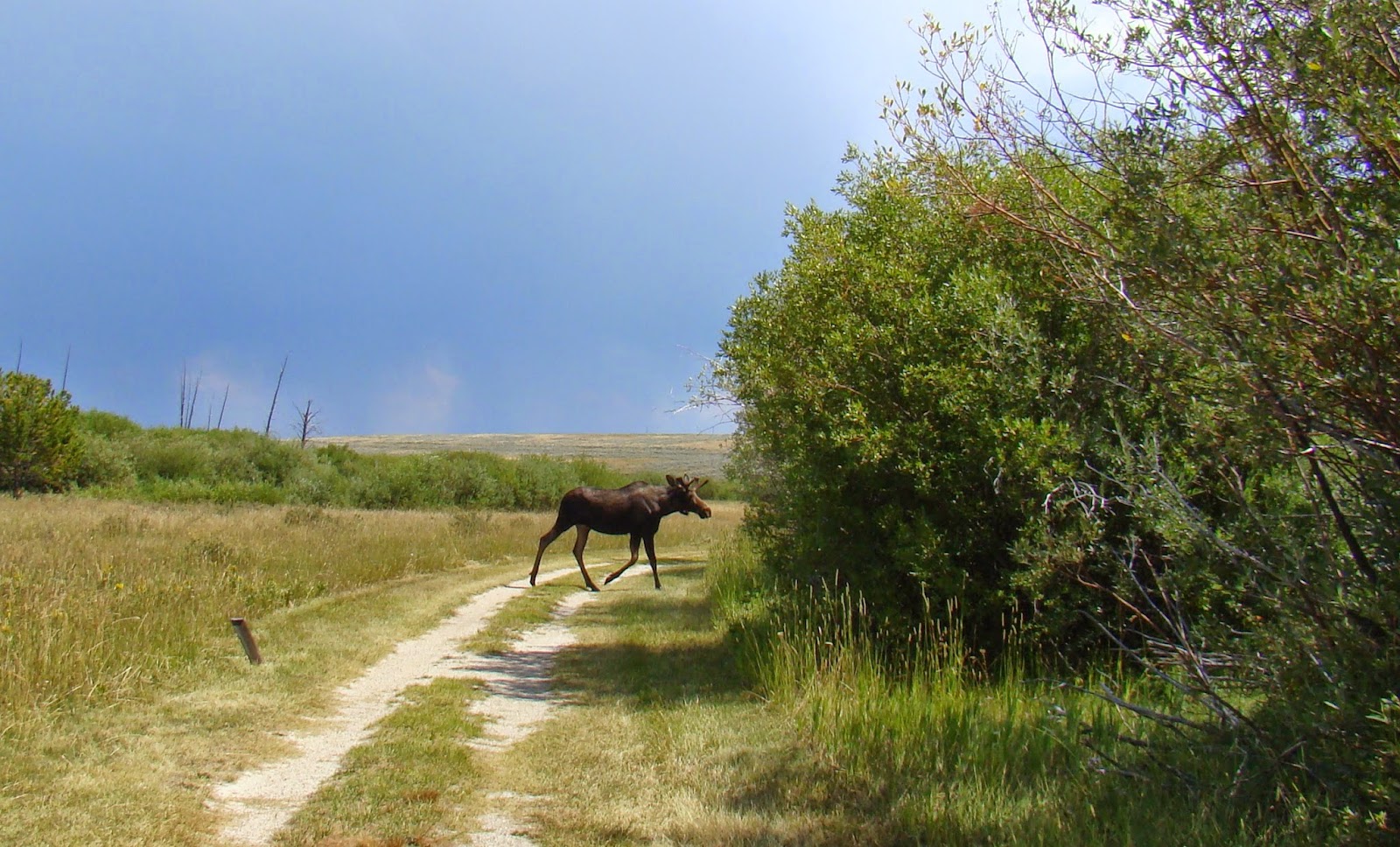 We were tired from our hike on the hillside, but we absolutely had to take the trail leading out to the Indian encampment on the valley floor. Imagine our shock and surprise when this majestic moose crossed our path right in front of us. I barely got the camera turned on in time! We sneaked around the bush to see where he'd gone and found him looking at us. I snapped another photo before he gracefully leaped away into the bushes. I remembered the sign at the beginning of the trail warning us to stay away from any wild animals we might encounter! We had gotten a little closer than we should have, but it was the moose's doing, not ours! 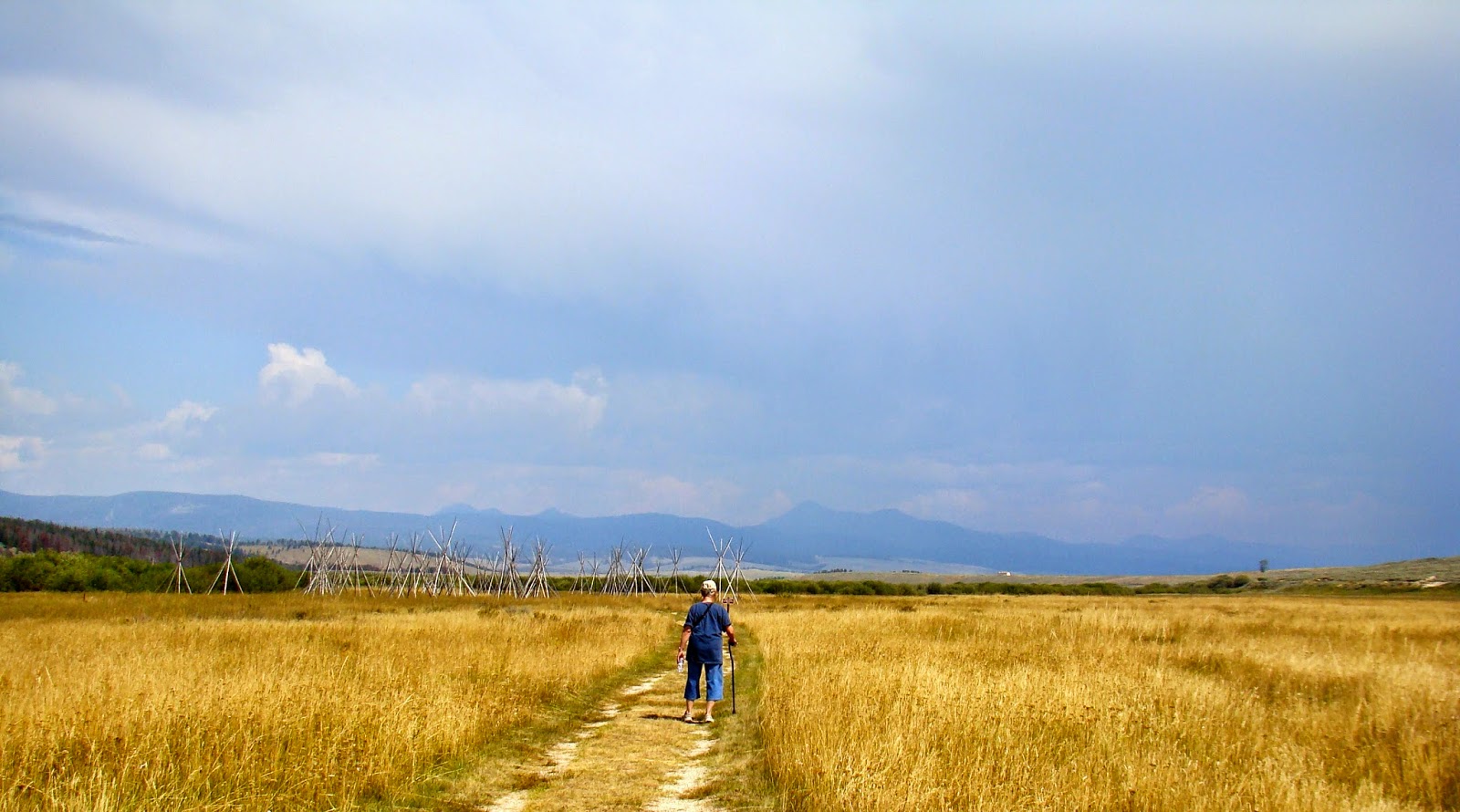 These teepee poles were erected in recent years by Native Americans honoring their dead. The entire valley is preserved as a burial ground, undisturbed and treated with the respect due to these tragically wronged peoples. (Click to enlarge.) 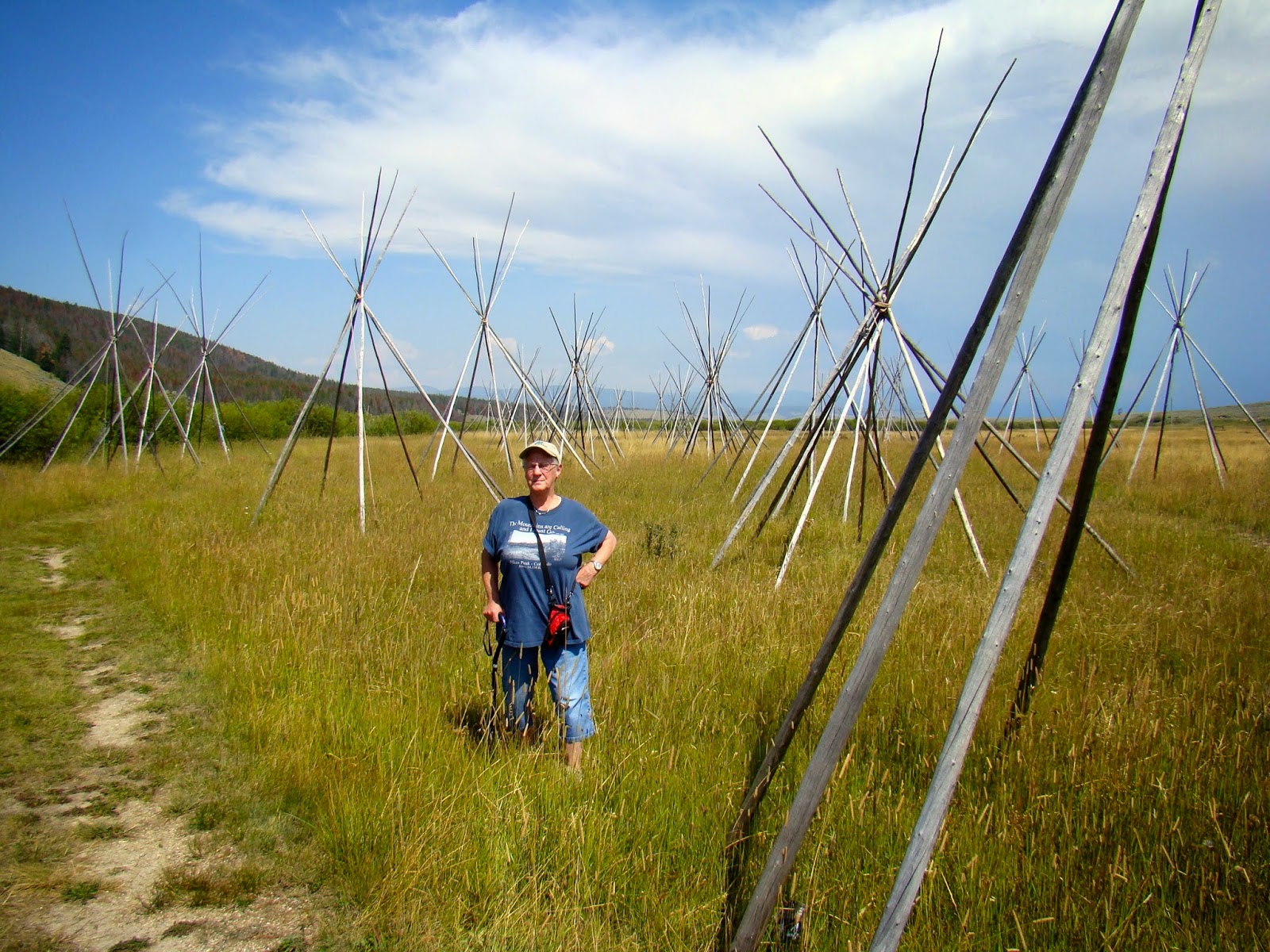 We could almost hear the wails and the cries of the women, children and elders who were attacked without warning. Thunder and lightning surrounded us, adding to the spirit memories
of the long ago Nez Perce travelers. Some of the most heart-rending words I've ever read were spoken by Chief Joseph as part of his tribe escaped into Canada while he stayed behind caring for the weak and sick ones.

"I am tired of fighting. Our chiefs are killed...It is cold and we have no blankets. The little children are freezing to death...My heart is sick and sad. From where the sun now stands I will fight no more forever."
Posted by Ann at 8:03 PM No comments: 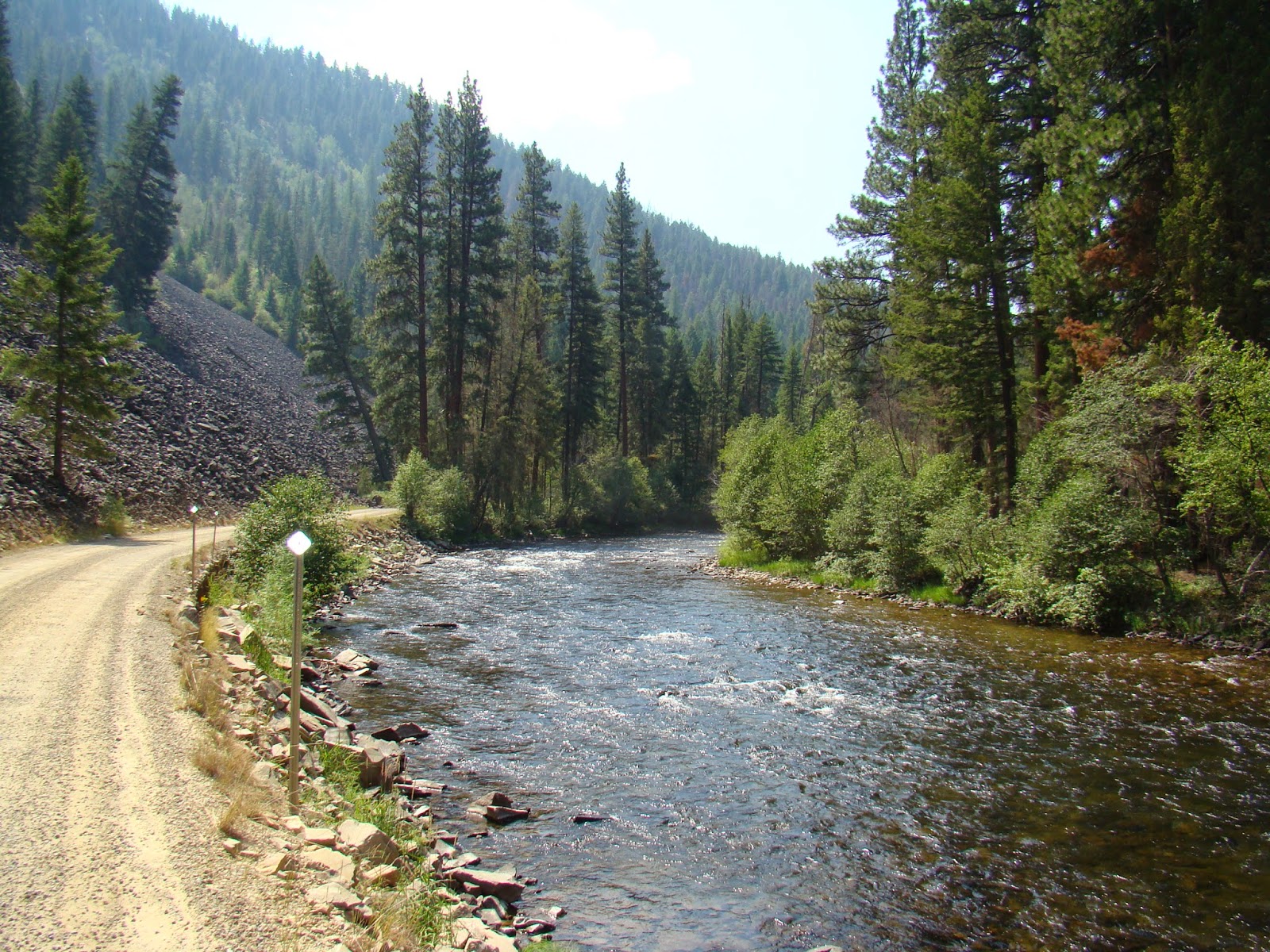 Today, Philipsburg, an old Montana mining town, was on our agenda. The map said we'd go about 50 miles on I-90, then 20 plus on the scenic Pintler Loop to Philipsburg. Well, always one to want to avoid the freeway, Mr. Keith asked if there were another way. There was the Rock Creek Road, a gravel and dirt road that did indeed come out at the town, but whose condition was unknown to us. We loved the scenery along the creek, but the road got more narrow and more bumpy as we went along. After 20 miles we came across a worker who advised us that the road only got worse and worse and she would never take her car on it, so we reluctantly turned around and retraced our miles back to the freeway. An hour later we'd reached our destination. 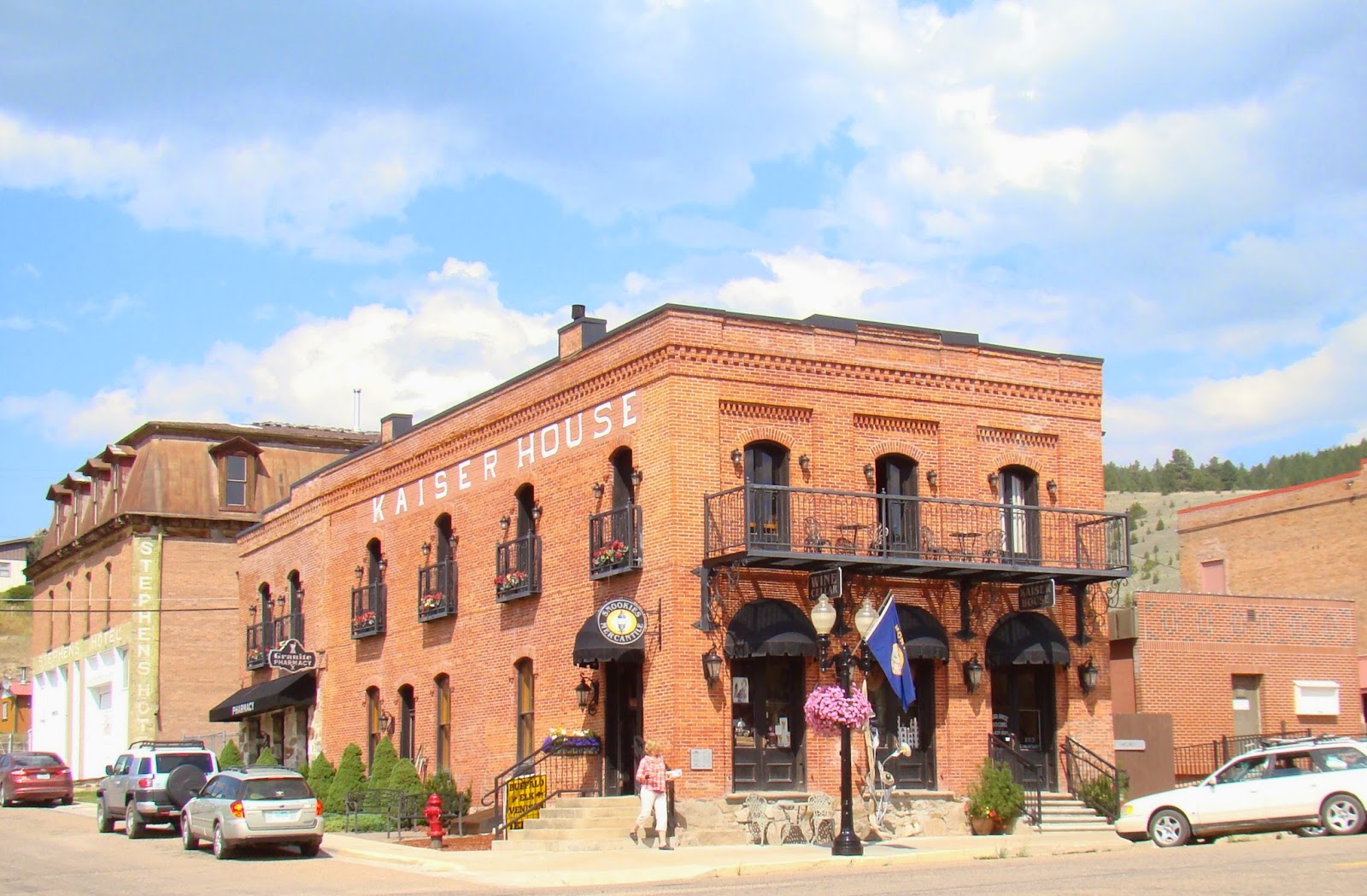 Philipsburg was founded in 1867 and grew rapidly at a “rate of one house a day,” and by year’s end had reached a population of about 1,500 residents. At the height of its prosperity, Philipsburg enjoyed the mining boom of the late 1800s, and today honors that past. The town is fully occupied and caters to tourists. On this hot day, the streets were lined with cars and the sidewalks with people going in and out of the many gift shops, museums, and of course the famous Candy Palace, the largest candy store we'd ever been in. We succumbed and bought a bag of delicious taffy made on site. 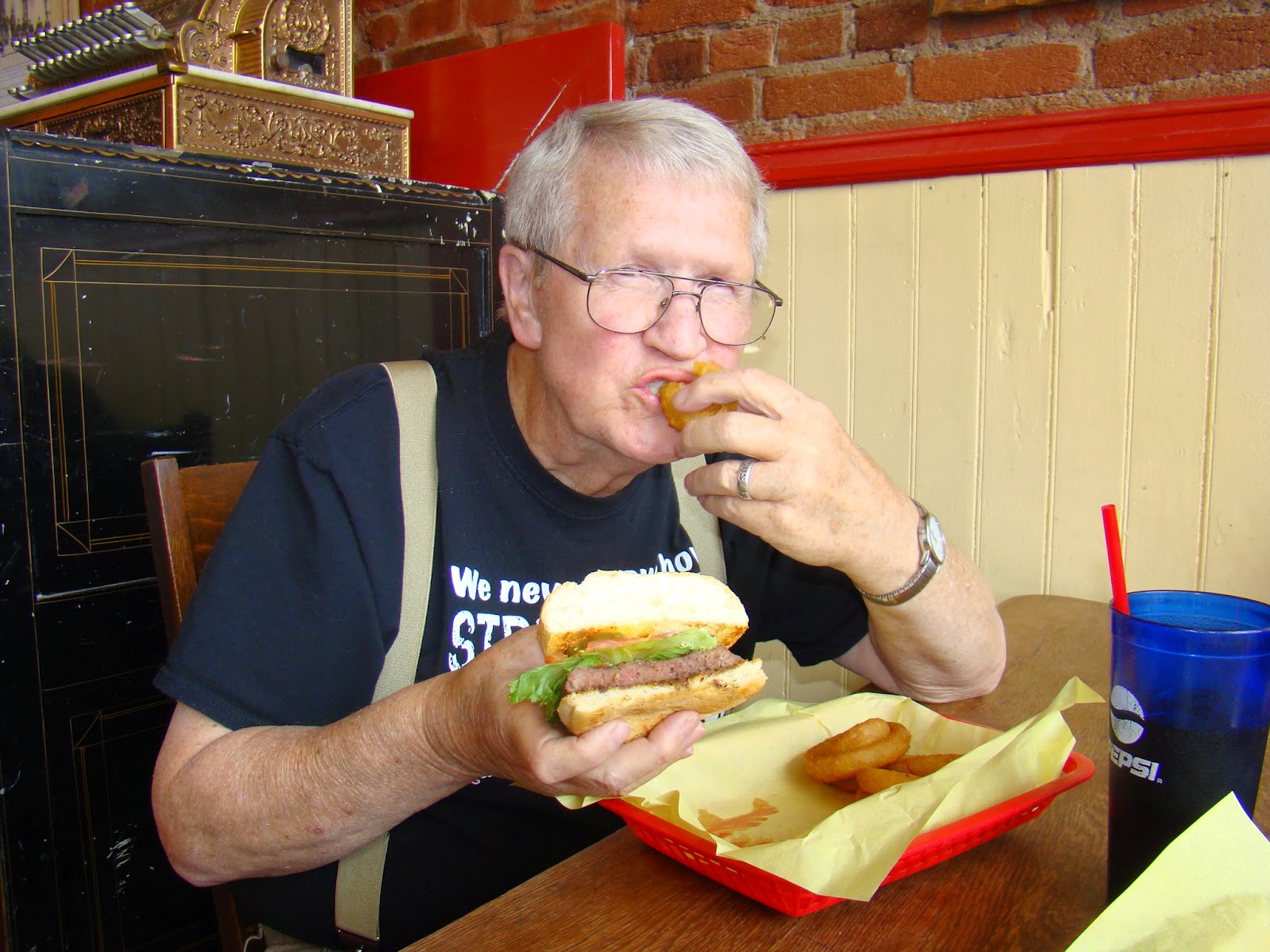 At last, we were able to have the buffalo burger I've been wanting since we came to Montana at the beginning of the season! The Doe Brothers' Restaurant was in an old original store, one with the high ceilings and creaky wooden floorboards. We split the burger, since we can't eat that much any longer! Today we stayed mainly in the town. Philipsburg also has garnet mining for the tourists, and a mostly ruined ghost town called Granite up in the hills above the town. We'd toured those before but because of our late arrival after our Rock Creek exploration we chose to stay closer in. 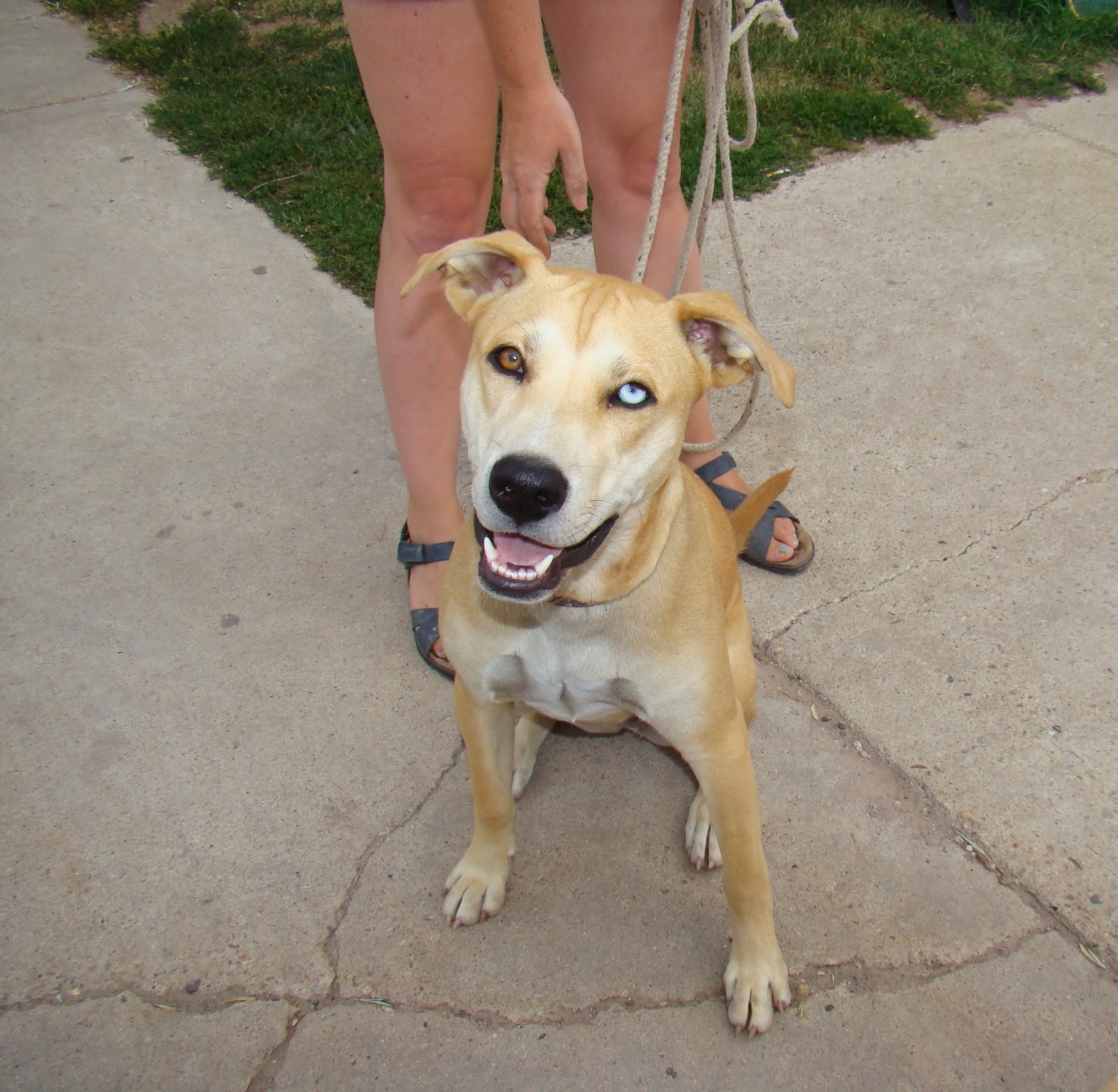 I had to snap a photo of this unusual blue-eyed, brown-eyed and friendly doggie named "Annie"! 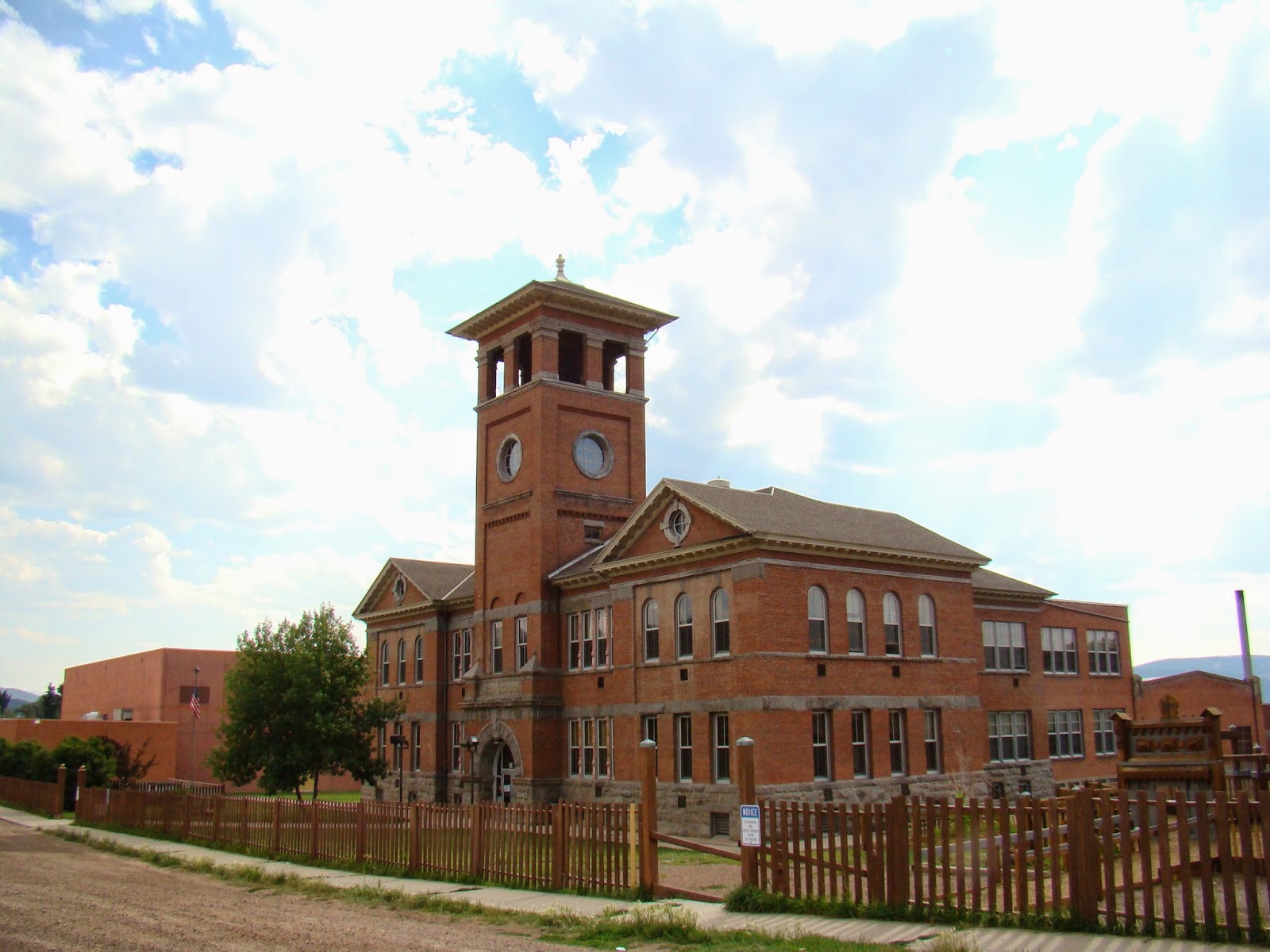 This majestic building has "High School" carved into the tower, but actually houses kindergarten through 12th grade. It was built back when the town was founded and is still in use around 150 years later. 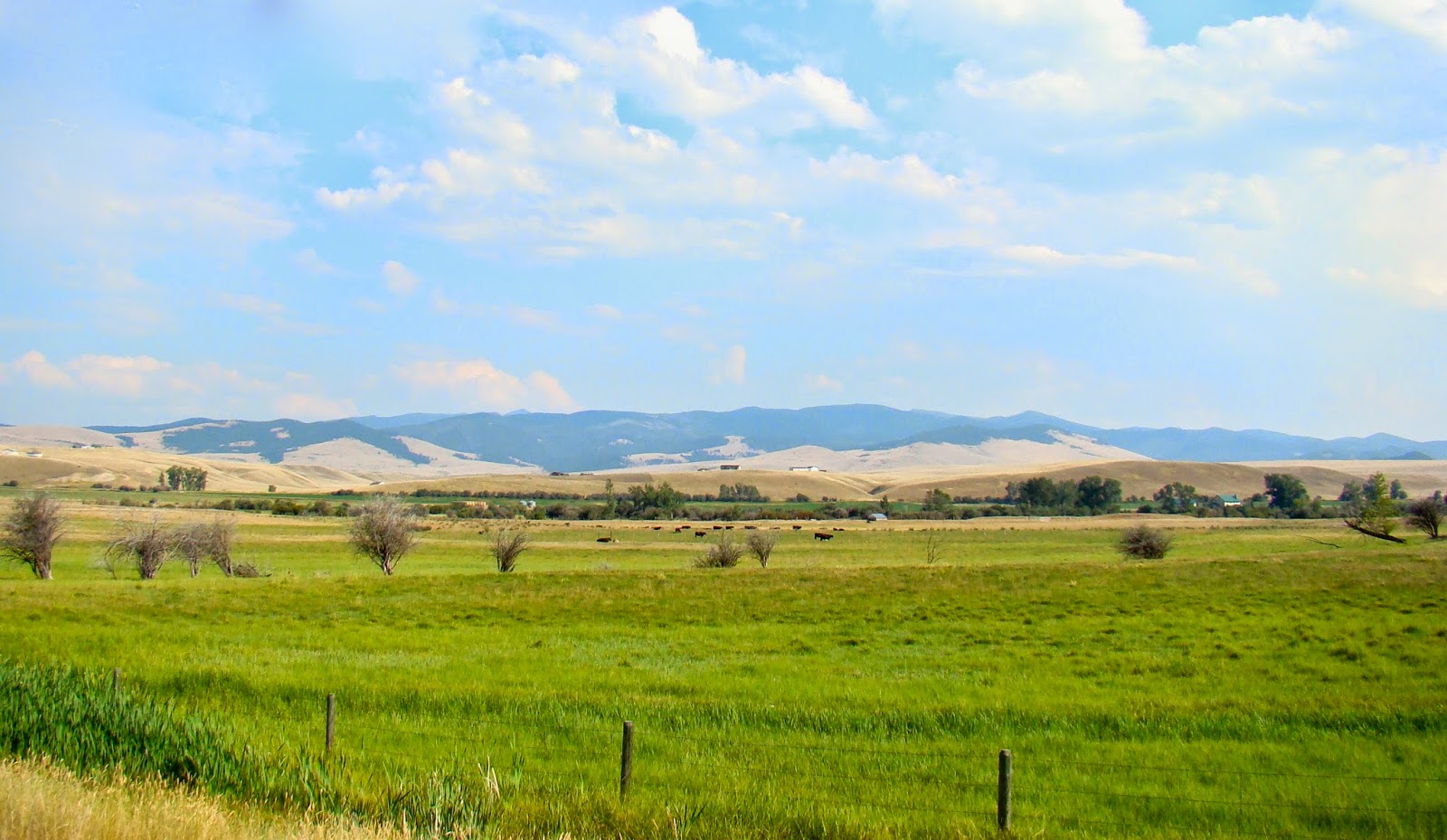 The Pintler Highway goes through this beautiful valley, so typical of the western Montana scenery. There were cows everywhere, peacefully grazing the day away. 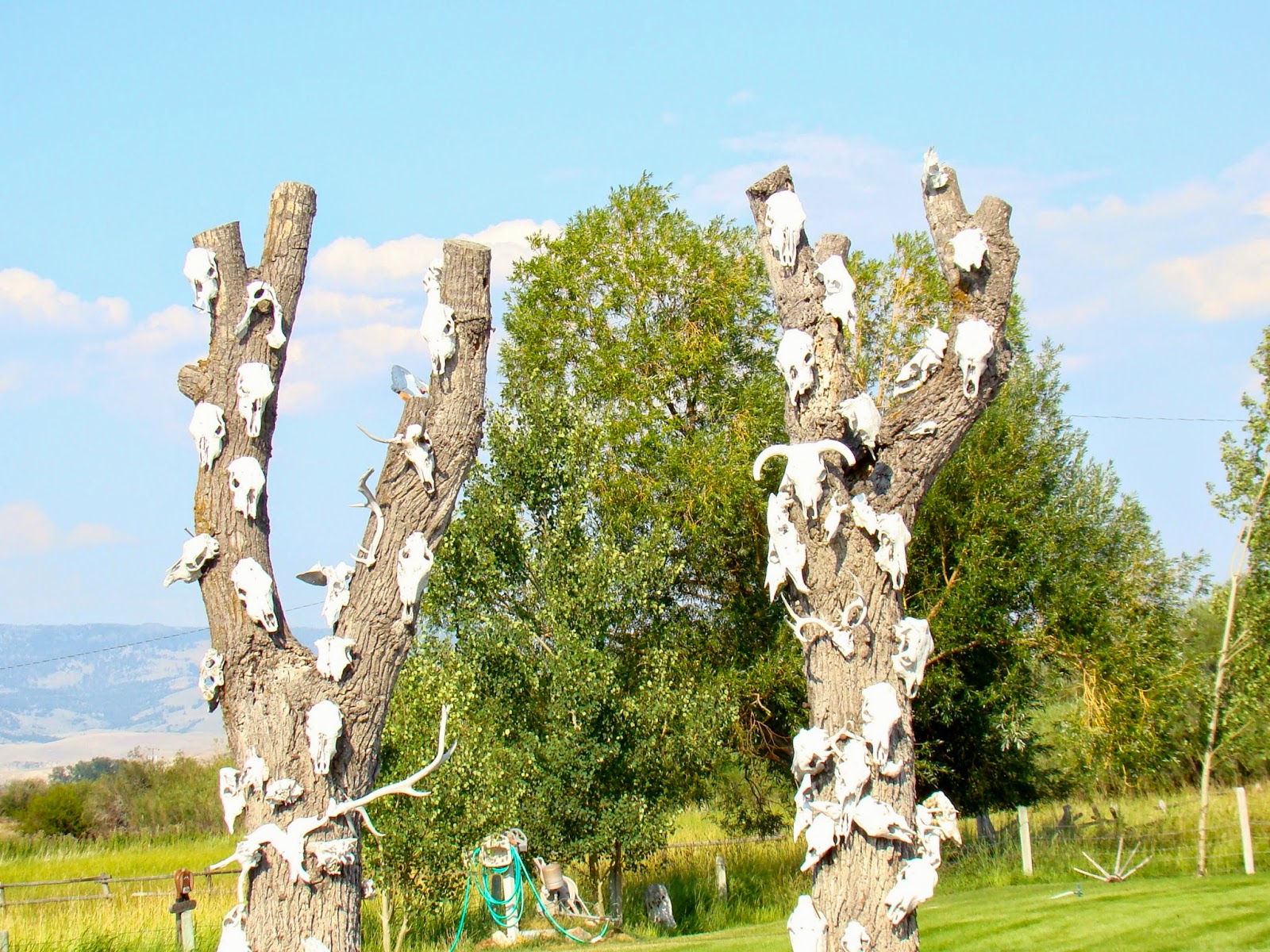 We were intrigued by this odd tree stump decoration. It looks like a variety of cow, mountain goat, deer, and maybe some other assorted horns and antlers. All in all, our trip today was rewarding and we learned more about Montana history. The best part may have been the taffy and the buffalo burger!