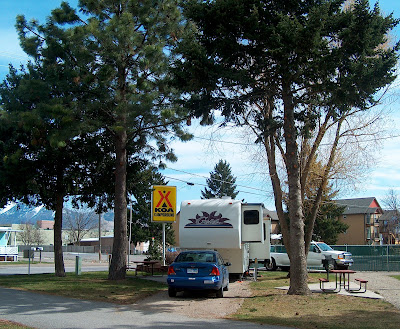 Here we are, settled in at the Missoula KOA on April 10. We love our spot! It was a bright, sunny day. 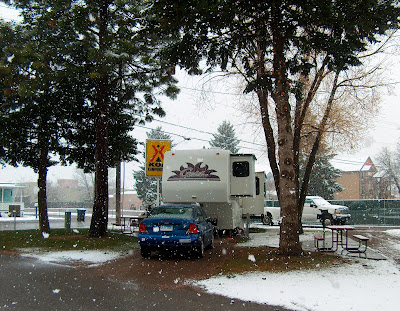 Here we are again, on April 13, wondering what happened to the sun. What is this white stuff? 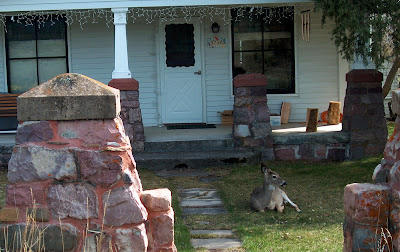 We took a drive up Rattlesnake Canyon, where there are lots of houses, and saw several deer. The one in this front yard looks almost like the family dog!
When we've settled in to a schedule, I'll look forward to taking some day trips with photos to post on my blog.
Posted by Ann at 10:06 AM No comments: 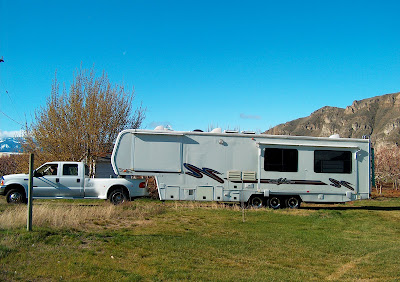 On April 6th we bid farewell to the pretty orchard we'd been parked next to for 5 months. Our sadness at leaving family and friends was mixed with excitement for the next adventure. We drove down I-90 to Ritzville, where we headed south to the Starbuck/Lyons Ferry Marina and KOA. We wanted to see some different country, as we've been across Washington on I-90 many times. 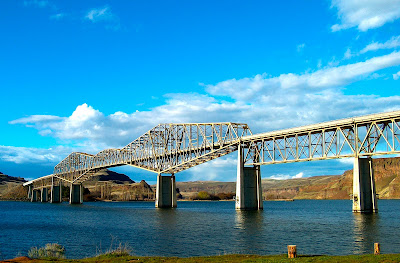 This bridge is right above the marina. It's the oldest bridge in Washington and is on the National Register of Historic Places. It is very narrow and only about a foot higher than our 5th wheel! A beautiful sight, though. That's the Snake River below. 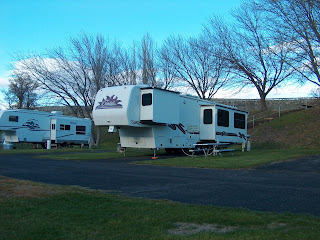 This KOA has only about 20 spaces, but is well laid out for the room they have. It's in 3 levels; tents above, RVs in the middle, and the marina, store, office, etc on the lowest level. We thought we'd be here for 2 nights but it turned into 3 when we read the weather report. High winds and some snow through Spokane, Idaho, and into Missoula. Good thing we have days to spare! 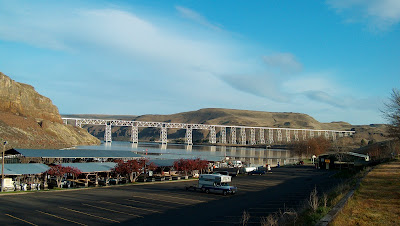 This is the view from our RV spot. The railroad bridge in the picture looms just beyond the marina. It's the longest railroad bridge I'd ever seen, and quite amazing. What a feat it must have been to build such an edifice! We watched several trains crossing over it during our stay. 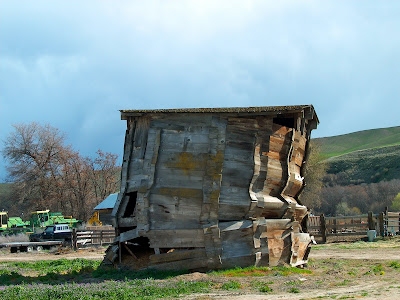 We were anxious to visit the town of Starbuck, 6 miles down the road, to see if they had a Starbucks coffee shop! They didn't, with a population of only 140! There was a great cafe´ there, though. Starbuck was a former railroad town. We found this intriguing building that looked like it was collapsing like an accordian! We didn't find out what it was, or had been. 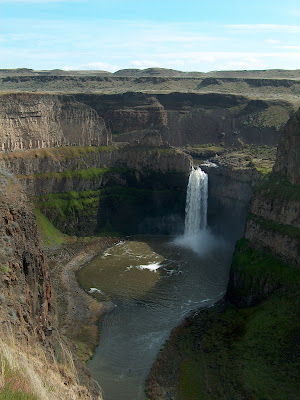 Palouse Falls is a hidden treasure. It can't be seen anywhere from the highway looking out across the rolling hills and scab lands. In fact, you can't even see it from the State Park's parking lot! You have to stand right on the edge of the cliff (there is a fence) to see this gorgeous sight! It is truly a wonder! The falls are about 6 miles north of the Lyons Ferry Marina. (Click to enlarge.) 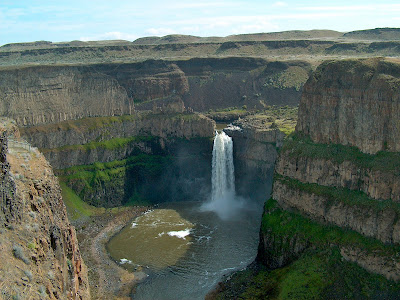 Above, another view of this gem of God's creation. 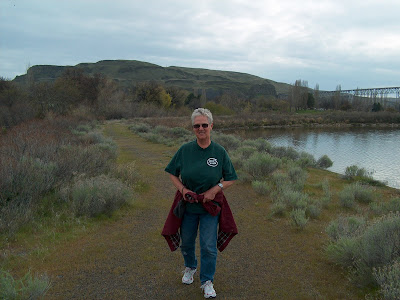 Across the Snake River from the Marina is another State Park. There is a long jetty going out from the park, I suppose to make a sheltered cove in the river, here widened by a dam (Lake Herbert G. Wells). It was a good, long walk, where we saw Canada geese, wildflowers, a few mysterious animal skeletons, and strangely shaped pieces of driftwood. 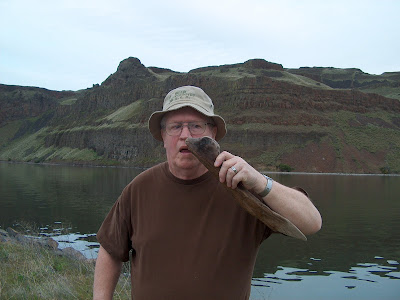 Keith is being silly with this piece of driftwood that we thought looked like either an ostrich head or a snake. 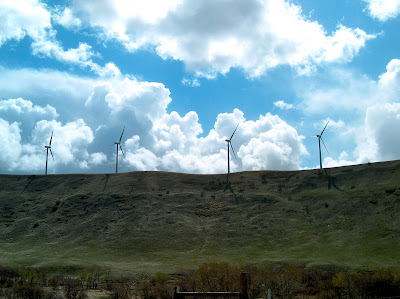 On our final, very windy day here, we took a long drive in a big circle to the east. We visited the town of Pomeroy, very quaint, and headed down the Tucannon River Road in search of another KOA we'd read about. We found it really way, way out in the middle of nowhere, but on the way there we passed literally miles and miles of these windmills on the hillsides. So the area once bustling because of the railroads is now turning to windmills to bolster their economy. The main sources of income still include the vast, beautiful wheat fields of the Palouse. We are so glad we got to see so much while here at the Lyons Ferry Marina!
Posted by Ann at 7:38 PM 2 comments:

Our Last Week in Wenatchee 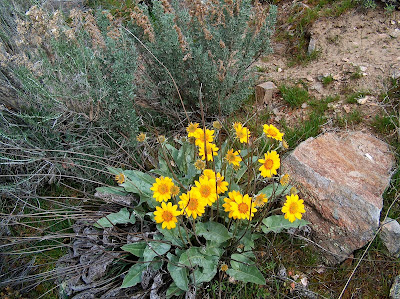 Spring is finally here! Arrowleaf Balsam has sprouted all over the hills. We wanted to take a few last drives around the Wenatchee Valley area before we head off to Montana for the summer, and we have been rewarded with some lovely sights! 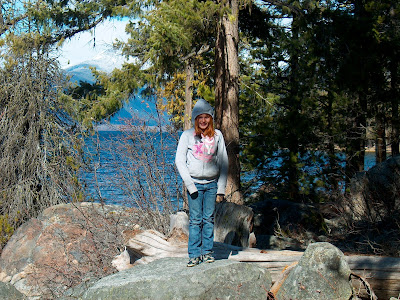 We drove up to Lake Wenatchee where it was beautiful but cold. Here is granddaughter Natalie hiking around on the big boulders near the water. 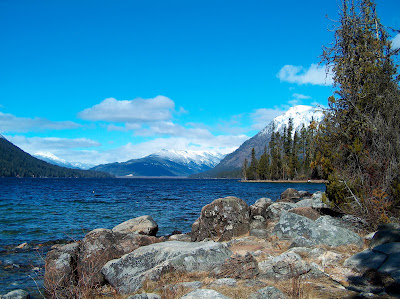 I think this is an exquisite picture of Lake Wenatchee. 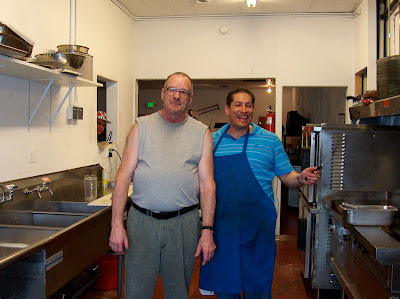 Two cheerful cooks at the Lighthouse Christian Ministries, Joe and Roy. They can put out a great meal! We celebrated Easter here in the afternoon, following our regular church in the morning. 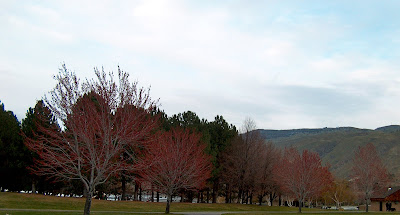 This shot almost looks like autumn, but is really spring, with the trees just beginning to leaf out. We took this picture at Lincoln Rock State Park.
Posted by Ann at 10:30 PM 1 comment: